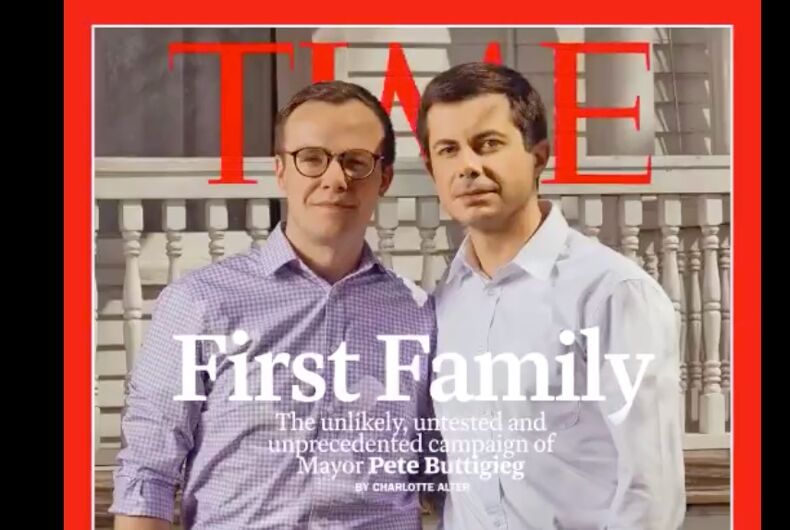 Pete Buttigieg and his husband, and Chasten Buttigieg, are featured on the cover of the current issue of Time Magazine, with the journal referring to the duo as the “First Family.” A lengthy look into the significance of Buttigieg’s campaign is featured inside the magazine, too.

In a field of more than 20 ­candidates­—including six Senators, four Congressmen, two governors and a former Vice ­President—@pete.buttigieg (pronounced Boot-edge-edge) has vaulted from near total obscurity toward the front of the Democratic pack, running ahead of or even with more established candidates and behind only @joebiden and @berniesanders. The 37-year-old mayor of South Bend, Ind. is a gay Episcopalian veteran in a party torn between identity #politics and heartland appeals, writes @charlottealter. He’s also a fresh face in a year when #millennials are poised to become the largest eligible voting bloc. His platform is “Freedom, Security and Democracy,” which wouldn’t sound out of place coming from a Bush-era Republican yet actually harks back to Franklin Delano Roosevelt. But in order to maintain his momentum, Buttigieg will have to do more to flesh out those ideas. And he’ll have to make inroads with black and Hispanic voters who have so far appeared unimpressed with his campaign. In many ways, Buttigieg is @realdonaldtrump’s polar opposite: younger, dorkier, shorter, calmer and married to a man (@chasten.buttigieg). His success may depend on whether Democrats want a fighter to match #Trump, or whether Americans want to “change the channel,” as Buttigieg puts it. “People already have a leader who screams and yells,” he says. “How do you think that’s working out for us?” Read more at the link in bio. Photograph by @ryanpfluger for TIME

“In a field of more than 20 candidates — including six Senators, four Congressmen, two governors and a former Vice — President @pete.buttigieg (pronounced Boot-edge-edge) has vaulted from near total obscurity toward the front of the Democratic pack, running ahead of or even with more established candidates and behind only @joebiden and @berniesanders,” the magazine said on their Instagram feed announcing the cover.

Buttigieg is the first out gay Democratic candidate to run for President of the United States — and should he win, he would be the youngest person elected to the office. Prior to him, John F. Kennedy was elected at age 43, and Theodore Roosevelt became president at 42 following the assassination of President William McKinley.

Pete Buttigieg was first elected Mayor of South Bend, Indiana with 74% of the vote. He earned over 80% of the vote when he ran for reelection — and after coming out as gay.

The Buttigieg cover joins many past Time magazine covers to feature LGBTQ people and issues, and each of which have often heralded tremendous shifts in the societal acceptance of LGBTQ people.

The first Time cover to focus on LGBTQ issues was likely in 1969, featuring a posterized image of a young man, with a banner across the upper third reading “The Homosexual in America.”

This was followed with what is arguably one of their most important: their 1975 cover featuring Leonard Matlovich. Matlovich in his Air Force uniform, appeared on the cover on September 8, above the words “I Am a Homosexual.” Matlovich became one of the most recognizable faces on the early LGBTQ rights movement, fighting the Air Force over his right to serve a decade before “Don’t Ask Don’t Tell.” Matlovich passed away in 2010.

In 1997, Time would again feature a LGBTQ person on their cover: this time it was Ellen DeGeneres, appearing alongside the slogan “Yep, I’m Gay.” The cover, released around the same time as her semi-autobiographical character came out on her sitcom, “Ellen.”

Much like the Ellen cover, a 2014 Time cover featuring actress Laverne Cox was viewed as a sea change in social awareness around LGBTQ issues. On the Cox cover, Time declared that year as “The Transgender Tipping Point,” a title that may have — rather than ushering an era of positive transgender strides — heralded the push back of the last several years against transgender acceptance.

In spite of the Time cover, it remains to be seen how far Buttigieg will get in the race, though his sexuality seems less of an issue at this time versus questions about his lack of clear policies and concerns over his understanding of race and privilege in the country.