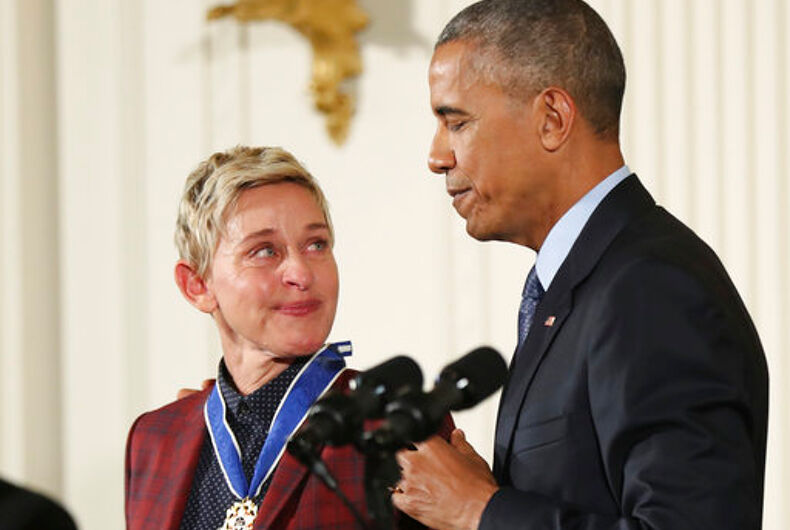 Ellen, who was awarded the Presidential Medal of Freedom in 2016, says that she has moved on from the bullying.Photo: (AP Photo/Manuel Balce Ceneta, File)

With a headline of “Yep, I’m Gay” on the cover of Time magazine and the same declaration on her sitcom, Ellen DeGeneres made history 20 years ago as the first prime-time lead on network TV to come out, capturing the hearts of supporters gay and straight amid a swirl of hate mail, death threats and, ultimately, dark times on and off the screen.

The code-named “The Puppy Episode” of “Ellen” that aired April 30, 1997, was more than just a hit. It was one of those huge cultural “where were you” moments for anybody remotely interested in TV, or the advancement of LGBTQ people working in TV, or who were itching to come out of their closets at home at a still-perilous time.

READ MORE: A Quick Q&A with Ellen About That Day She Came Out

Variety summed it up this way: “Climaxing a season of swelling anticipation, Ellen Morgan (the bookstore-managing alter ego of Ellen DeGeneres) finally acknowledges her lesbianism tonight in an ‘Ellen’ hour that represents television’s most-hyped coming out since Little Ricky came out of Lucy 44 years ago.”

The hype was real, fed by DeGeneres’ personal desire to end her secret-keeping at age 38 and to bring her TV character along for the ride. The off-screen act came first in Time by slightly more than two weeks, but “Puppy” was months in the making under lock and key, something that failed to matter when the script leaked and the world then waited.

Why risk it all? Because DeGeneres, one of America’s sweethearts then and now, was done with the lying and the hiding.

“It became more important to me than my career,” she said in a recent interview with The Associated Press. “I suddenly said, ‘Why am I being, you know, ashamed of who I am just to be successful and famous in society’s eyes?'”

The hate was also real. There was pulpit-pounding from conservatives, including full-page newspaper ads (the late Rev. Jerry Falwell called her “Ellen DeGenerate”). There was nasty mail all around, including some for guest star Oprah Winfrey suggesting that she “go back to Africa.” After “Puppy” wrapped, cast, crew and live audience were hustled out of the Burbank, California, studio because of a bomb threat.

Winfrey, who played Ellen’s therapist, told the AP she had no clue that “I would get the worst hate mail of my career.” She praised DeGeneres for having the courage to produce a “seminal moment for anybody who was hiding behind anything.”

The episode was watched by an estimated 44 million viewers. It won an Emmy for writing, a Peabody as a landmark in broadcasting and numerous other accolades. The attention coincided with a new and very public relationship for DeGeneres with her girlfriend at the time, Anne Heche, herself new to the out life.

The following season, DeGeneres’ fifth, was the last. It was a failure in terms of ratings. The network took to slapping “adult content” warnings on the show, something DeGeneres knew nothing about ahead of time. The season was bashed by some as unfunny and “too gay,” as was the out-and-proud DeGeneres herself as she lived life big with Heche offscreen. Sponsors fled and the show was canceled.

DeGeneres went into a “hole,” a deep depression, where she stayed without work for more than three years. Laura Dern, among the guest stars on “Puppy” and happy to be included, didn’t work for a year after she played the out love interest to whom Ellen Morgan finally came out. (Both Dern and Winfrey join DeGeneres on Friday on “The Ellen DeGeneres Show” to mark the anniversary).

Ellen Garcia in San Pedro, California, is a gay, 47-year-old office administrator for a mental health nonprofit. She was 27 and out to just close friends and co-workers when she watched.

“How you feel about yourself, and how you feel about how society views you, plays a huge factor and that’s why this show was so significant, because it brought all those things out,” she said. “It made me feel normal.”

So what made it the right time for DeGeneres? Well, nothing, she said.

“There was every indication that I should not do it. My publicist at the time said, ‘Don’t do it.’ The studio, the network, everyone said (it),” she recalled. “I said, ‘You know, look, you may lose a show but you have thousands of other shows revolving through this door that come to you and you’ll have another show. This is my career. If I’m willing to lose my career for this, you have to let me do this.'”

The doing wasn’t easy. The first draft of “Puppy” was rejected by the show’s Disney point person. It took forever for script approval, with “Puppy” finally hitting air as the fourth season’s third-to-last show, a full hour as opposed to the usual half-hour. DeGeneres had thrown a bash at her California house for cast members and writers months earlier, at the top of the fourth, declaring then that she wanted to come out, but nobody was sure how it would all play out.

“I remember these walks from our offices to the Disney offices to see the big guys,” recalled Dava Savel, one of the executive producers and writers. “We walked with her and it was kind of like the Bataan Death March. We were like, ‘Ohhh, here we go.’ I remember Ellen crying on the way back when Disney finally gave her the OK.”

History was made. Friends gathered around TVs. The gay rights advocacy group GLAAD organized watch parties after an ABC affiliate in Alabama declined to air “Puppy.”

DeGeneres herself made a spectacular comeback, eventually, now the host of her own daytime talk show and still America’s sweetheart at age 59. (President Barack Obama awarded her the nation’s highest civilian honor, the Medal of Freedom, last year.) Numerous gay leads followed on TV, yet advocates hope for still more diversity and accuracy in story and character development.

Eric Marcus, creator and host of the podcast “Making Gay History” and author of a 2002 collection of oral history of the same name, put it this way: “For everyday people, Ellen made gay OK.”

What was Caitlyn Jenner doing at the White House?

Why LGBTQ organizations are backing Emmanuel Macron for president of France