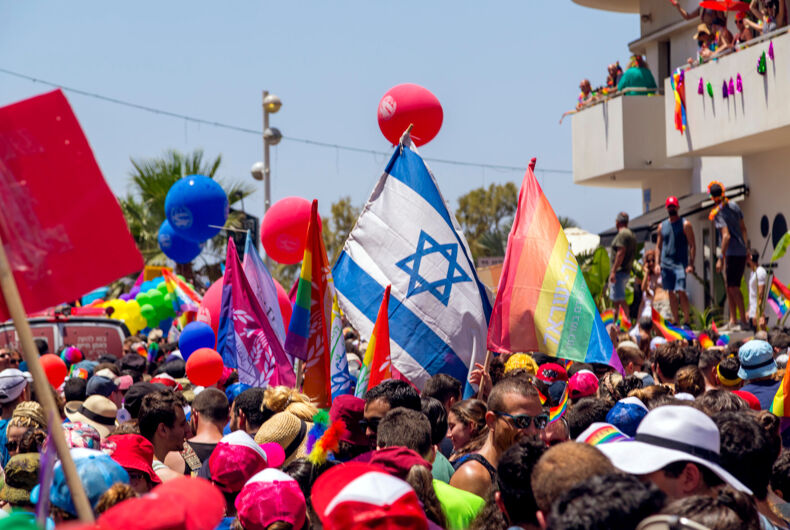 Approximately 250,000 people attended Isreal’s world-famous Tel Aviv Pride event earlier this month. It was the largest event in the country since 2020 when the COVID-19 pandemic canceled that year’s Pride.

Israel regularly gets accused of “pinkwashing” — that is, using its progressive LGBTQ rights record to help justify its decades-long military actions and human rights violations against Palestinians. But the event remains especially notable considering that it’s the most pro-LGBTQ event in the Middle East.

Related: Peace isn’t binary. You can be both pro-Palestine & pro-Israel.

Here are the five coolest aspects of Tel Aviv Pride.

1. You can march in the Pride parade

Most U.S. Pride parades require groups to apply for permission to march as throngs of people watch from the sidelines. But Tel Aviv Pride encourages attendees to participate rather than spectate, joining floats and entertainers along the nearly two-mile parade route.

While loads of people still watch the parade from the sidelines, anyone can march with the eye-catching floats (many of which feature dancers, glittering displays, and pop music). The slow-moving floats all have guards who hold ropes around their perimeters to make sure that people keep a safe distance from them.

A post shared by Gay pride in Israel (EN/עב) (@isragay)

Almost all the literature and coverage surrounding Tel Aviv Pride touts Israel’s progressive policies toward gay and lesbian people. But the country also has a thriving transgender community that can easily get overlooked by casual tourists. At Tel Aviv Pride, however, they’re hard to miss — trans men proudly show off their top surgery scars and trans women walk proudly hand-in-hand with friends and family.

An estimated 0.5 to 3 percent of Israel’s population is trans, and many others haven’t yet come out of the closet or started realizing their gender identities. But at the pre-parade festival, attendees can meet with trans activists, including volunteers with the Gila Project for Transgender Empowerment, to learn even more about local efforts to help the country’s most marginalized community.

The Tel Aviv Pride parade used to march through the city’s downtown area and along its coastal shoreline by the Mediterranean Sea. The route allowed closeted Arab, Jewish, and conservative community members to discreetly watch from the sidewalks, attending while maintaining a low profile. The route also allowed attendees to enjoy a large afterparty on the beach, dancing and wading all night long.

This year, the parade marched a route alongside Ganei Yehoshua Park in the city’s swanky northern neighborhood. While the route provided a straightforward and sunny path to the event’s massive afterparty, held in a large park field, it also hid the Pride event almost entirely from the city, denying cis-hets and closeted people the opportunity to see the country’s large LGBTQ community.

Critics of the new route say that it’s necessary for the city to see the queer community and grapple with the rights that LGBTQ people are still denied. But organizers said that the march was moved due to construction on its usual route. It’s unclear whether the parade’s old route will be used in future years.

5. The nighttime after parties show another side of Israel’s queer community.

While the Pride parade snags headlines from the international press, Tel Aviv’s Pride weekend is also famous for its numerous after-parties at local clubs and bars citywide.

Many of the parties take place in mixed spaces where straight and queer people dance together to pop music from the U.S. and the Middle East. The parties also mix men and women, offering a nice contrast to occasionally sex-segregated gay bars in other countries. Plus, one can find a party matching their specific tastes, whether that’s a lesbian mixer, a leather party, or just a friendly street party where anyone can stop by.

It’s easy enough to find listings for these parties in local publications, and the parties often continue until the early morning hours, as bars are allowed to continue serving until whenever.

What does it mean to identify as agender?