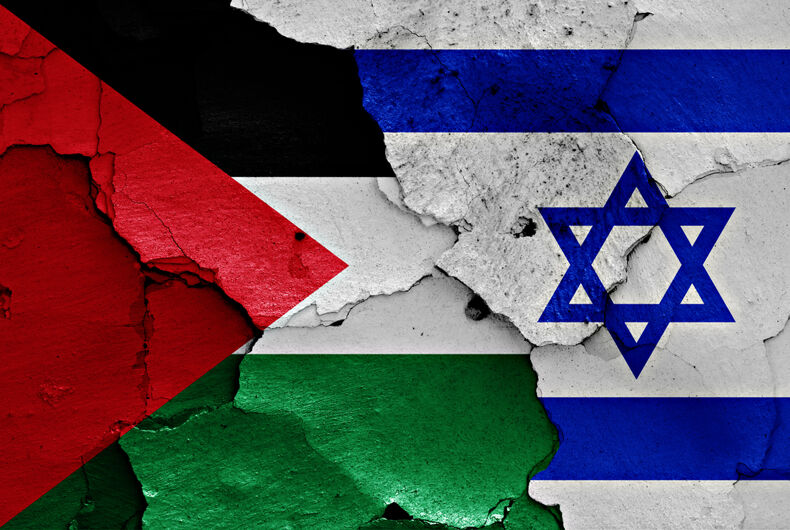 I talked to a good friend this week about the current violence between Hamas in Gaza and the state of Israel, and between Jewish and Arab Israelis. I tried to explain to him the unjust historical process behind the creation of modern Israel, and why Palestinians have been used as unwitting pawns in this tragic drama.

My friend responded that I “should stop complaining about the past.”

Related: Hesitant about getting the COVID vaccine? Here are some reasons why you should get it.

I was quite bewildered. This friend, a progressive who is working to end climate change and is learning more every day (as am I) about the legacy of racism in the United States, told me basically to forget the past and move forward.

I am certain, knowing this man as I do to be a good, kind, and generous friend, that he would never say that Black people should stop complaining about slavery, lynchings, Jim Crow, segregated facilities and institutions, or the killing of unarmed Black and brown people by police. So why would he tell me to stop complaining about the plight of Palestinians?

George Santayana’s quote has been reiterated so often that it has entered the realm of cliché, but it is as true today as when he uttered it, “Those who forget history are condemned to repeat it.”

Unless we know history, we will never understand our present and on which path to take for our future. And yes, I am very troubled regarding the historical path on which the modern state of Israel was mandated.

Soon after declaring war on the Ottoman Empire in November 1914, Britain’s War Cabinet began imagining how it might divide that empire if the war turned Britain’s way. A Zionist member of the cabinet, Herbert Samuel, proposed that the British government support the creation of a Jewish state in Palestine to enlist Jews worldwide to defeat Ottoman control.

British Foreign Secretary Lord Arthur Balfour, in 1917, shocked the world by issuing what came to be known as The Balfour Declaration asserting that the British government supports the establishment of a “national home for the Jewish people” in Palestine, which was then under Ottoman domination with a small Jewish population.

Balfour’s “declaration” was contained in a letter to Lord Rothschild, a leader of Britain’s Jewish community. Though the British government maintained continual talks with Zionist and anti-Zionist Jewish groups throughout the war to draft the final version in 1917, they spoke with no representatives from the local Palestinian population giving them virtually no input into the process.

The Declaration, however, became a supposed legal means to inaugurate a possible state of Israel. The United Nations strengthened Britain’s stand on November 29, 1947, by approving an initiative to release Britain from the former Ottoman territory of Palestine and by mandating a “two state” plan, one Jewish and one Arab with Jerusalem under international control. Israel declared its independence on May 14, 1948, which corresponds with the Hebrew date of 5 Iyar.

Jews around the world gave celebration. For them, the vision of the founder of the modern Zionist movement, Theodor Herzl, came true. Herzl’s pamphlet Der Judenstaat of 1896, articulated the founding of a Jewish independent state, he hoped, during the next century.

Why Is a Jewish State Needed?

Zionism comprises a nationalist ideology arguing for the reestablishment of a Jewish state centered in the area corresponding with their ancient homeland of Canaan, also referred to as the Holy Land or the region of Palestine.

A Jewish state is critical if the Jewish people are to survive physically, religiously, and ethnically as a people. I base my reasons on my study of history, which shows clearly that no nation has, for the long-term, protected and defended the rights of its Jewish residents freely to practice their faith, to attain and maintain full citizenship rights, and to have rights of protection from state-supported or state-sponsored violence and violence from the people.

I would have been very content if rather than claiming the ancient land of Canaan, we had been mandated a chunk of Germany and Poland following the Second World War for a Jewish state. While this never could return the six million beautiful souls taken from us, it could have, at least, given us a chance of establishing and maintaining a secure ground for the prolongation of the Jewish people.

Like myself, some fundamentally (no pun intended) oppose the concept of any nation with an official or unofficial religion, either de jure (by law) or de facto (by fact), and, therefore, contest the existence of any theocratic state; I am attempting to suspend my judgment on this point.

The seemingly intransigent and tragic conflict between Palestinians and Jews – inside and outside of the modern state of Israel – has lasted many generations, resulting in perpetual war, death of innocents and combatants alike, pain, grief, suffering, terrorism, hopelessness, denial, separation of families, loss of property and material possessions, and a numbing of the senses. The entire planet and all its inhabitants have been negatively affected by every detail small and great of this perennial impasse.

Is there any way out of the morass, or will this current reality never change? I am not a mystical sage. I have no magic crystal ball in which to gaze. No beautiful doves are ready to take wing on my signal. But through extensive study and contemplation, I have perceived some options:

People on the political Left and the Right can stay entrenched in their binary ideologies and policy positions by refusing to see the complexities and nuances. They can continue to pursue the present course of (in)action by marginalizing and demonizing anyone who in any way supports the establishment and/or maintenance of the state of Israel as a nation for the Jewish people.

They can also persist in uttering the word “Zionist” with disgust and scorn as justification for automatically dismissing others’ views and stances, while telling themselves they are “remaining true to their principles,” “maintaining their integrity,” and most of all, “acting intersectionally.”

Groups like Hamas and Hezbollah can perpetually refuse Israel’s “right to exist,” and repeatedly launch missiles on territories populated by Jewish civilians while using their own civilians as fodder for incoming bombs. Palestinian and Jewish parents can continue to send their youth in harm’s way in defense of sacred soil promised by God to three varied peoples: Jews, Christians, and Muslims.

On this latter point, to paraphrase Golda Meir, fourth Israeli Prime Minister and a founder of the state: Peace will come when the Arabs [and Jews] will love their children more than they hate [each other].

We Have Other Options

The Israeli government and leaders of Hamas and Palestinian Authority can remain intransigent on several critical issues while failing to move forward on good-faith peace efforts and agreements.

They might feel concerned that if peace were to break out in the region, current and future levels of foreign aid from outside nations and individuals might dry up with these sources no longer seeing a further need for aid. They may also use the Machiavellian tactic of “divide and conquer” to better ensure their chances of retaining and enhancing power.

One can demand that Jewish people, native and immigrant, go back “home” to their countries of origin, no matter where that may be and no matter the current state of (un)rest. On this account, one can also demand that all non-indigenous non-First Nations peoples evacuate North and South America and the Caribbean for their ancestral homes as well.

I envision, however, other options. We need to step back and take a 30,000-foot overhead view so we can comprehend where we have been and possibly chart a different path forward by considering ourselves as both and simultaneously pro-Palestine and as pro-Israel, and by seeing these positions as not mutually exclusive or contradictory.

I welcome additional items to add to this list.

I am certain that the clear majority will automatically reject some or even most of these suggestions, and quite possibly, for this reason, the list might ultimately prove ineffective as a compromise framework.

But since governments and their representatives have not been able or even willing to bring equitable and lasting peace to the Middle East, I hope we as all the people will finally have a voice, a seat at the figurative and literal table.

Maybe if more people stand firmly as both pro-Palestine and pro-Israel, maybe we can break the age-old bypass and reach a peaceful conclusion. End the binary, bring on peace. What a concept?!