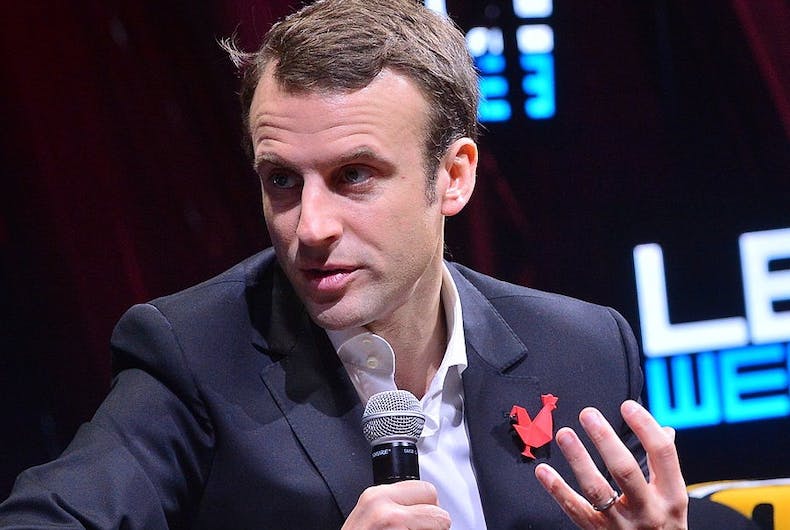 Emmanuel Macron and Marine Le Pen were the top two finishers in the first round of voting in the French presidential elections last Sunday, which means that they will be the only two candidates in the second round of voting on May 7.

American media has been focused on Le Pen, as her party – the anti-Europe and xenophobic Front National – easily fits narratives about a rising tide of proto-fascist, anti-globalist governments in wealthy democracies.

Despite the numerous articles about how some LGBTQ people will be voting Le Pen, her support for a ban on marriage by same-sex couples and her opposition to other LGBTQ rights are well-known. Less known is where her rival – and the likely next president of a country with one of the largest economies in the world – stands on these issues.

Two of the larger LGBTQ organization in France – SOS Homophobie and Act Up – have thrown their support behind Macron. Here’s why.

He also supports allowing single women and lesbian couples access to artificial insemination (currently only allowed for heterosexual, married couples in France), saying that the current ban is “intolerable discrimination.”

His campaign sent an open letter to SOS Homophobie saying that he wants to encourage educators to do more to fight anti-LGBTQ bullying in schools. He promised more sensitivity training for law enforcement and prosecution in hate crimes and cases of discrimination.

He also signed SOS Homophobie’s “charter” of engagement on LGBTI issues, which says, among other things, that LGBT-phobia is not just an opinion and that he will hire LGBTQ people to work in his administration.

So it’s about as obvious that Macron is better on LGBTQ issues than Le Pen as it was obvious that Hillary Clinton was better than Donald Trump last year. Sure, some low-information voters might not know and queer conservatives will find ways to make it seem like there’s a debate, but anyone paying attention can figure it out.

That said, he’s not perfect. He has not addressed a major issue for transgender rights in France: updating one’s documents without having to go to court. The current law, passed last year, says that in order to change the gender marker on a French person’s ID card, that person has to go in front of a judge and present “a sufficient assembly of facts” that they are living a gender identity that’s different than what’s on their ID. Transgender organizations want that to change to a simple declaration on the part of a transgender person.

Act Up is also worried about Macron’s economically conservative policy preferences, including his promises to reduce the number of medical workers in France and to make accessing unemployment insurance more difficult.

Act Up also hasn’t forgotten Macron’s gaffe a few months ago, when he defended anti-LGBTQ protestors.

One of the fundamental errors of François Hollande’s presidency was to ignore a part of the country that has good reasons to feel resentful and sad. It’s what happened with marriage equality, where that France was humiliated.

As a wealthy banker who’s promising more austerity and small reforms, Macron is anything but perfect.

Still, it’s hard to argue that he’s the worse of the two candidates on LGBTQ issues.