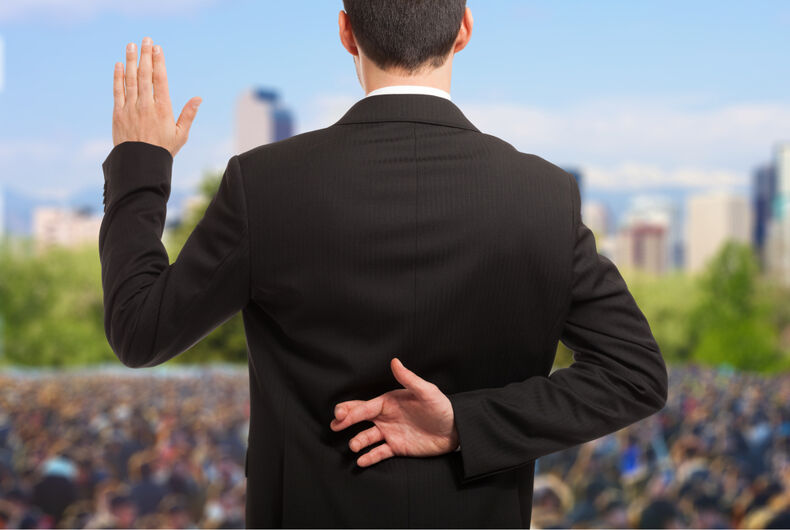 Words in state law must be interpreted as having “natural and ordinary meaning” under a bill passed by the Tennessee Senate on Thursday. Critics call it a sneaky way of encouraging state judges to deny rights to same-sex couples and transgender people.

LGBT groups lamented the 23-6 vote and immediately began prodding Republican Gov. Bill Haslam for a veto, but his spokeswoman Jennifer Donnals said he is “deferred to the will of the legislature.” The House approved the same legislation last month.

Sarah Kate Ellis, president of the national LGBT rights group GLAAD, said the bill would be bad for business and “set a dangerous precedent that could place the well-being of LGBTQ Tennesseans in jeopardy.”

The legislation has been pushed by the Family Action Council of Tennessee, which advocates for one-man, one-woman marriage.

The measure addresses questions raised in a same-sex child custody case in Knoxville, in which the Family Action Council tried to intervene on behalf of 53 state lawmakers, only to be rejected by the circuit court judge.

Despite this background, Sen. John Stevens, R-Huntingdon, insisted that his bill isn’t aimed at LBGT people. He said he simply wants undefined words to mean what they meant at the time lawmakers put them into the law.

Asked if the bill could infringe on same-sex couples’ ability to have kids or be married, Stevens said he has “no idea.”

The legislation passed despite concerns raised by Tennessee Attorney General Herbert Slatery of potential conflicts with the U.S. Supreme Court’s gay marriage ruling, as well as state law that requires gender-specific words to be interpreted as inclusive.

Slatery’s opinion predicted that judges would side with the gender-inclusive interpretation given the clashing requirements. He took the same position when he weighed in on the same-sex custody case, urging that judge to interpret “husband” and “wife” gender-neutrally, as “spouse.”

That case hinged on the wording of a 1977 state law, which says that a person born through artificial insemination with the consent of both husband and wife will be their legitimate child. The attorney general urged the judge to apply the law to same-sex marriages.

The judge declined, relying on a literal interpretation of wording lawmakers approved nearly four decades before the Supreme Court’s landmark gay marriage ruling. He decided that only the biological mother, not her same-sex spouse, has legal rights to the child.

The woman denied custody says that’s unconstitutional, and the judge has put his ruling on hold pending possible action by the state court of appeals.

Stevens said the bill applies forward to new cases, not to old ones. He said that as far as he knows, the bill has nothing to do with a case going on in Knox County.

David Fowler, who leads the state’s Family Action Council, has raised fears that family law cases could be “taken from the states and placed in the hands of federal judges” now that the U.S. Supreme Court has “redefined marriage.”

He said the measure awaiting Haslam’s signature is needed to keep judges from “rewriting statutes to suit their policy agenda.”

Why LGBTQ organizations are backing Emmanuel Macron for president of France

This affirming Heineken ad will give you goosebumps & maybe even hope