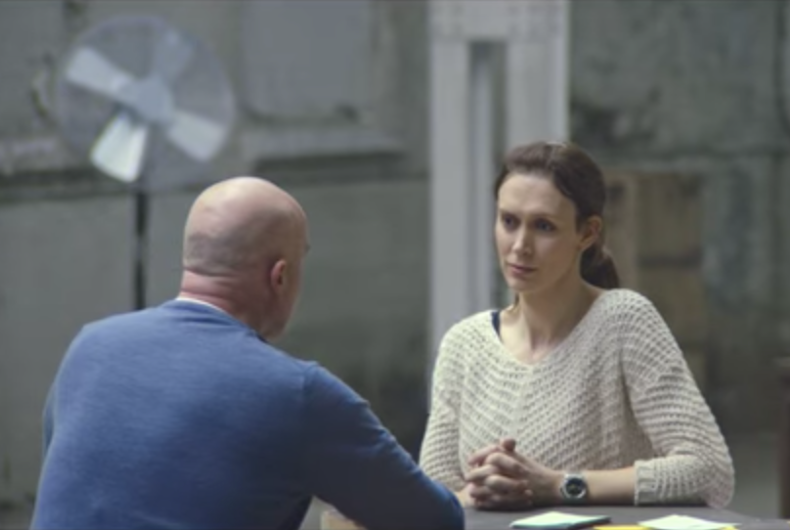 Is there more that unites us than divides us? That’s the question at the center of a new Heineken TV commercial in the United Kingdom, which forces six strangers with opposing views on climate change, feminism, and transgender rights to get acquainted while doing a task, before they learn of each other’s differences.

Heineken, of course, has been courting the LGBTQ community for years. Last year, the company released an ad featuring Neil Patrick Harris saying “Heineken Light makes it ok to flip another man’s meat” and it pulled its sponsorship from the NYC St. Patrick’s Day parade in 2014 when organizers banned pro-gay signs and LGBTQ contingents from marching.

The supposedly unsuspecting participants in this commercial are paired-up with their philosophical opposite and asked to assemble bar stools and a bar. Part way through the process, they are given questions to ask one another in order to get to know more about who they’ve been working alongside.

Through that process, the pairs start to bond, recognizing all that they have in common. That’s when the other shoe drops.

The participants are then invited to grab a bottle of Heineken and set it on the bar before watching video of their new friend sharing their opposing views.

Once these men and women learn about each others’ views, they are offered a chance to sit down and discuss their differences over a beer — if they dare.

Watch what happens when the transphobe in the experiment realizes that the military veteran he just complimented is a transgender woman. It’s not perfect, but it might just give you hope.