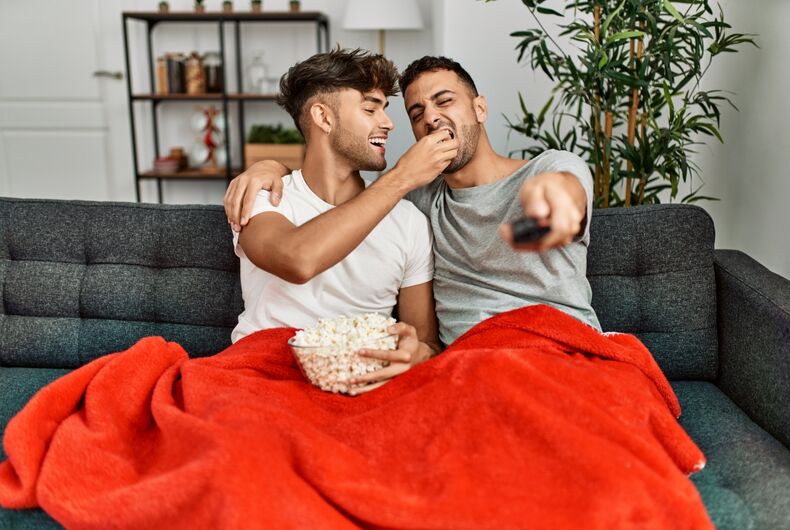 While LGBTQ representation on the big and small screen still isn’t perfect, we’ve been blessed with so many wonderful series and movies over recent months, all of which are perfect for a Pride binge sesh. Whether you want a relatable coming-of-age series about awkward queer teens, or vampire love stories are more your thing, production companies have been delivering the goods.

Let’s take a look at some recent LGBTQ releases that will make your heart swell and your brain question why we were ever deprived of these stories.

Related: 6 queer musicians to add to your Pride playlist immediately

Based on the graphic novels by Alice Oseman, Heartstopper took the world by storm this year when it landed on Netflix. The series tells the story of Nick and Charlie, two students attending an all-boys grammar school in England. Sparks soon begin to fly between the pair after their first meeting, and they fall hard and fast, becoming more than just friends. But, with Nick still figuring his sexuality out and Charlie on the receiving end of homophobic bullying, they’re forced to navigate their relationship on the down-low.

Heartstopper has LGBTQ representation around every corner, whether it’s Nick and Charlie’s romance, the antics of school lesbians Tara and Darcy, or the story of trans girl Elle, who is finding her feet at her first all-girls school.

Everything you’ve ever wanted to see on screen, Heartstopper offers.

One thing we love to see is queer TV shows that branch out into other genres, with First Kill doing that so perfectly. While the rom coms are adorable, who’s to say we can’t also have gay horrors?

Meet Juliette and Calliope, the former is a vampire and the latter, well, she’s a vampire slayer. They should be a match made in hell when it comes to love since they’re both ready to make their first kill but their emotions soon take over as they discover the other is rather easy to fall for.

Juliette and Cal have a palpable chemistry that just pours out of the screen and it’s thrilling to watch them grapple with their own desires and also what their families want for them. It’s a supernatural take on the classic Romeo and Juliet love saga and it has been welcomed with open arms by lesbians around the world.

Crush tells the story of a young artist who is forced to join her high school track team – a stark contrast to her “gay who doesn’t do sport” persona. So, she decides to take full advantage of the opportunity to pursue her crush… only to find herself falling for an unexpected teammate in the process, which shows her how true love should be.

There’s nothing to hate about this wholesome movie. It’s funny, it’s cheesy, and it’s so cringe in the best way possible. Straight people got to grow up with their corny rom coms, so why can’t queer folk? It’s positive from the get-go (not to share spoilers but there are no lesbian deaths in this one!), it’s so relatable and representative of modern times, and ticks all the boxes that a teen sapphic movie should.

I Care A Lot

If you loved Rosamund Pike as the unhinged Amy Dunne in Gone Girl, you need to add I Care A Lot to your list.

The film follows a shady legal guardian who lands herself in hot water when she tries to swindle a woman who actually has ties to a powerful gangster. You could say it takes “be gay, do crime” quite literally.

One of the greatest things about it is how queerness is so integrated into the story without the characters’ sexualities becoming plotlines in themselves. They simply are who they are – no coming out story arch, no residual trauma, just two lesbians pulling off scams, wearing power suits, and being generally badass.

Time to take a break from the feel-good stuff to offer a weepy suggestion – It’s A Sin.

In what can only be described as one of the most powerful pieces of television from recent years, this series follows Ritchie, Colin and Roscoe who, at the age of 18, leave their homes to begin a new life in London. However, before they realize it, they find themselves caught up in the HIV/AIDS crisis of the late 1980s.

As the series progresses, and despite the lack of understanding and compassion about the virus from the rest of the world, the friendship group only becomes more determined to live fiercely despite the threat HIV poses to them.

While it’s also full of LOLs, It’s A Sin cuts really deep and is a reminder of our community’s history and how fortunate we are to be where we are today.

If you want something to just make you feel warm and fuzzy inside, then look no further than Special.

In this semi-autobiographical series, funny guy Ryan O’Connell – a gay man with cerebral palsy – decides to start chasing the life he wants.

There’s nothing to complain about with Special – it’s bursting with one-liners and dry wit, incredible comic timing and queer struggles that are all too relatable. It strikes a nice balance between being funny and educational, as well as offering representation for the disabled community in a story written and produced by someone with lived experience.