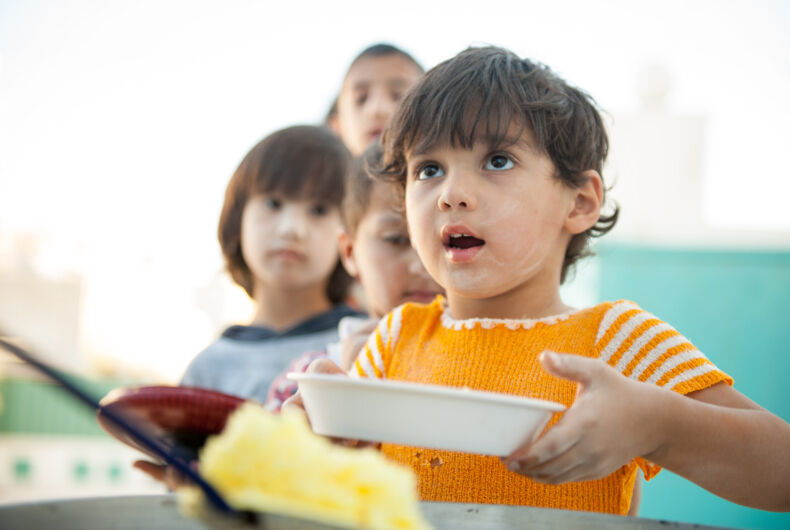 Sen. Roger Marshall (R-KS) may block a bipartisan effort to fund school lunch programs because he doesn’t like guidance that schools shouldn’t discriminate against LGBTQ students when distributing food and giving financial assistance to disadvantaged students.

While Democrats are rushing to pass the legislation before the funding runs out on June 30, Marshall says he is “contemplating” objecting to the measure. It only takes on Senator to block the expedited vote and delay the process.

“I’m just afraid that schools in Kansas won’t have school lunches because of this administration’s radical view on transgender issues,” Marshall said. “And I’m afraid that they’re going to raid the school lunch program over that issue.”

While Marshall claims the Biden administration plans “to use the school lunch issue to gain leverage over [schools’ broader LGBTQ policies],” the USDA guidance only applies to programs that receive federal nutrition money. It requires school administrators to submit their policy for combating discrimination against students.

The requirements do not apply to any other school programs or policies. LGBTQ students or their parents would be allowed to file a discrimination complaint if, for example, they were denied a lunch or financial assistance.

Republicans have been pushing legislation that targets transgender children recently, including denying trans kids the right to play school sports, get medical care, or even use the correct restroom during school hours.

A block by Marshall, or any other GOP Senator, would result in increased hunger for millions of children.