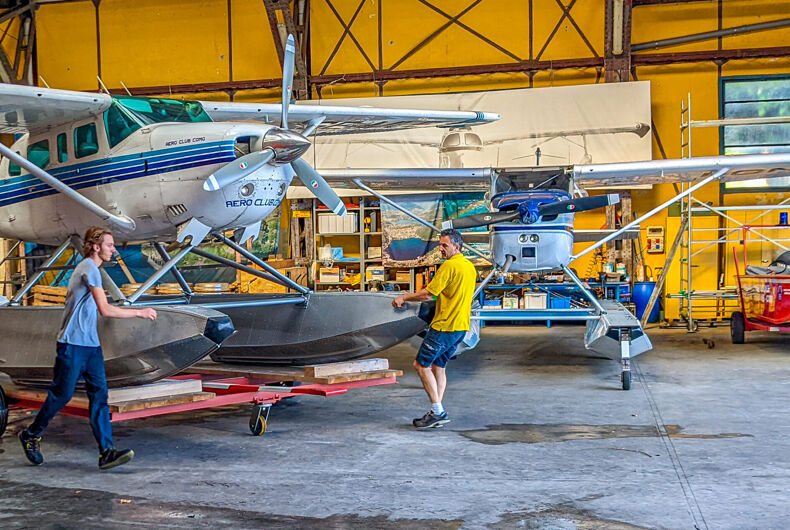 The floatplane looked a lot smaller than I expected.

Brent and I had come to Como, Italy, to meet up with an old nomad friend, Javier, who had himself come to the lake to get his European floatplane license. Shortly after we arrived, he offered to take us up with him over Lake Como during one of his lessons. There was only room for one passenger during the lesson, so I went first.

Related: All I really needed to know I learned in rehab

Javier told me in advance we’d be in a Cessna 172 Skyhawk, the most common plane in the world. The company has built more than 44,000 of the planes, which can be floatplanes or not. That’s four times more than the number of Boeing 737s, the most popular commercial airline plane.

But it sure was dinky. The aluminum pontoons which replaced the wheeled landing gear looked about the size of small kayaks.

I wasn’t surprised two men could easily roll it out of the hangar and down to the lake.

The passenger compartment looked ridiculously small too. It looked barely big enough for two people, much less the four it could supposedly hold.

Would I get claustrophobic? I was going to be trapped in there for the next hour and a half, high above Lake Como.

I felt a twinge of nervousness, which surprised me. After all, I once worked as a flight attendant, and I’d taken a floatplane once before.

Then again, a small plane had just crashed in Nepal — I’d seen the picture of the strewn wreckage in the paper two days earlier. And while I had great faith in Javier, he was still a student.

But I was excited too. Ever since Javier had made the tentative offer to take us up, it had been hard to keep myself from messaging him to ask, When??!?

Javier proceeded to do his external check of the airplane — and then started hand-pumping the water out of the pontoons, something that had to be done before each flight.

Javier conferred with the ground crew, then approached me with a grim look on his face.

Bad news, he said. He’d left a note for the crew explaining there would be three people flying that morning, not two. They’d been supposed to put in less fuel.

But they’d put in the usual amount. That meant that with me on board, there could be a problem with the weight and balance of the plane during take off. The instructor agreed they could make one attempt, but if they had to abort it, we’d taxi back to the dock and I’d have to get out.

Umm, okay, I thought, I’m not so crazy about maybe aborting our take-off.

I was also disappointed, but I tried not to show it. Javier had gone to great lengths to make this happen, and I didn’t want to make him feel bad if it didn’t.

I introduced myself to Lorenzo, the flight instructor, and thanked him for letting me come. But he acted rather gruff. Did he not want me here?

Finally, we all climbed into the plane — which felt roomier inside than it had looked from outside.

We taxied out into the lake to take off. The engines were surprisingly loud, and I was really grateful Javier’s girlfriend Missy had lent me her noise-cancelling headphones.

Javier did a few more pre-flight checks, gave me a thumbs up, and hit the gas. The plane roared forward across the lake, skipping over the surface like a big stone.

I just hoped we weren’t about to sink like a stone.

The floatplane bounced, and we all bounced with it.

But we didn’t lift off.

It’s not going to happen, I thought. Oh, well. At least we got this far.

Down below, the blue waters of the lake grew more and more distant. We were hundreds of feet in the air! The ferries plying the lake now looked like children’s bathtub toys.

Our course took us along the western edge of the lake, over the towns of Cernobbio and Moltrasio that I’d already visited by ferry.

To the east, I spotted Torno, one of Lake Como’s most charming and iconic villages.

In the morning sunshine, the world was an impressionist painting: a lush wash of red-tiled roofs, a smear of impossibly green mountains that rose up to a vivid blue sky, and a lake below that sparkled with a mix of green and blue.

I grinned from ear to ear. This was exactly the sort of experience I’d been hoping for when we’d left Seattle five years earlier.

Suddenly, Lorenzo spun around toward me. He was excitedly saying something and pointing out of the plane.

Has something gone wrong?

But no, he was smiling. He pointed down.

Apparently, Lorenzo liked having me onboard. That was a relief.

Time flew as fast as the plane, and I tried to take as many pictures as possible.

Lorenzo again pointed at something — much more emphatically.

Another floatplane! It was ahead of us and off to our right.

We caught up with the other plane. Soon we were close enough that Javier could wave to the other pilot.

Then we flew over the town of Bellagio — the stunning Melzi Gardens laid out beneath me like a flawless diorama.

Enough photos, I thought. Now I just wanted to enjoy myself — to savor the experience and appreciate the beauty of Italy from this truly extraordinary perspective.

Before I knew it, we’d reached the northern end of the lake, flying past the town of Colico. Directly in front of us, the Lepontine Alps towered up: the border between Italy and Switzerland.

I’ve been lucky enough to hike the Alps, and they always remind me how small and insignificant I am. Seeing their grandeur from above, from a plane, made me feel the same way but even more so.

Javier gently banked the plane and soon we were headed south once more.

The plane abruptly started descending. In the middle of the lake? No one had mentioned anything about this.

Is the engine stalling out?

But no, the engine was still running, even if much more slowly than before. And neither Javier nor Lorenzo seemed worried. This must have something to do with his lessons.

We kept descending, and the lake rushed up toward us. I tightly gripped my seat.

The pontoons hit the surface of the lake, and we bounced once, then twice.

Javier increased the thrust, and we flew upward again.

He was practicing his landing. And he was quite good!

Before long, we were back at Como. We banked once over the town, then glided in for a perfect real landing.

As we taxied back toward the dock, I messaged Brent and told him we’d made it back safely.

The experience had been even more incredible than I’d hoped. The flight was exhilarating, the view stunning.

But I also felt a little bit sad.

It took me a second to think this feeling through. Why would I feel sad? Was it just that the flight was over?

I thought about all the ferry trips Brent and I had made up and down the lake. Each time, I’d only been able to see so far. Each bend in the lake held the promise of some wonderful new discovery.

But there was also always something held back — another bend, or a small ravine heading off into the forest, or a hill or mountain over which I couldn’t see.

But from the plane, I’d been able to see almost everything there was to see, at least from high above.

Thanks to the ingenuity of mankind, I’d kind of conquered the lake and its surrounding mountains.

And that meant some of the mystery was gone now.

Which is why I felt a little sad.

In the end, I was okay with it. I’ve always believed life is both pluses and minuses — everything has its price. When I added up this day’s tally, I’d definitely come out ahead.

But maybe the next time I had a chance to completely uncover one of the world’s mysteries, I might opt not to. I might let some of the mystery remain.

Pride In Pictures: In memory of Uncle Ron