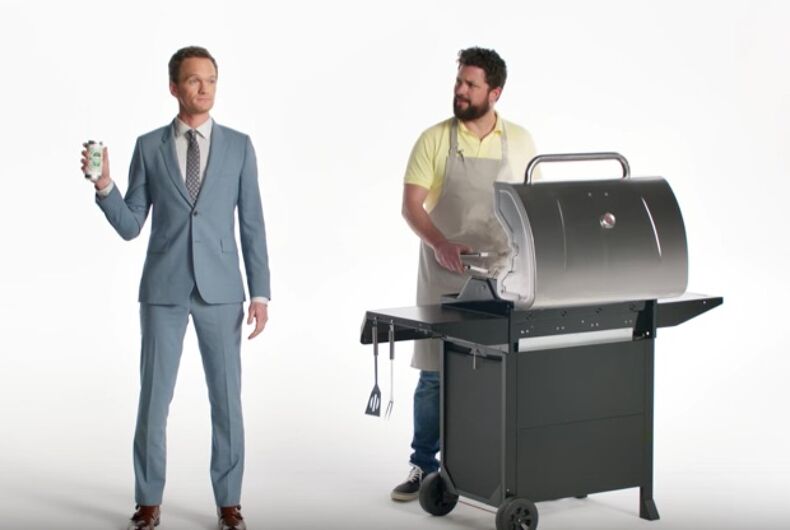 Neil Patrick Harris is appearing in a new Heineken Light commercial and it’s rubbing some folks the wrong way.

In the new spot Harris, whose deadpan delivery earned him kudos for the previous series of ads for the beer company, claims “Heineken Light makes it okay to flip another man’s meat” as a bearded everyman grills beside him.

“No, no, no. You never flip another man’s meat,” replies the man at the grill.

“That’s true. Can I have one?” asks the man and Harris replies with “Can I flip your meat?”

After a long pause and consideration, the man finally says “No.”

Rightwing pundits, the religious right, and some beer drinkers are up in arms over the commercial and the gay innuendo.

Commenting on the company’s YouTube page, user “Jeff” plaid the “Won’t someone think of the children!” card. “Not against gays, but this is a little vulgar for a tv commercial that kids are going to hear. It doesn’t matter if it’s a woman or a man saying it,” he wrote.

User Dave Colmer joined in with a witty pun and a dated reference to Bill Clinton’s administration. “So Heineykin makes a commercial like this? Look your orientation makes no difference to me, but this is just as distasteful as a commercial if Taco bell made one about ‘Can i munch your taco?’ It’s just outta line. If the tables were turned Tipper Gore would be all over this, but since its gay, the leftists allow it!”

“We all know which meat this little faggot would like to flip,” commented Aqualung1956. One can assume Aqualung wasn’t trying to give us his age, but instead what year he decided to stop growing up.

Still, not everyone was flipped out over flipping meat.

TheAuntieBa made sure to tell everyone, “I’m a straight, married old lady, and I LIKE this commercial. Get a life, homophobes.” To which Boi Wonder replied, “You’re part of the problem fag lover.” Maybe someone should tell him how gays use the word boi.

“The funniest and gayest part of the whole commercial was the fact that the griller took a pause to entertain the thought,” Dizzy Sosa said. Haven’t we all, Dizzy? Haven’t we all?

Over at AdLand, the reporter just can’t wrap their head around the spot.

“I have no idea what the innuendo is because I am not a gay man but I am pretty sure there’s some innuendo here. I feel like a kid watching my parents verbally flirt, I know something is going on but I’m not getting it,” the author writes.

“As for targeting football fans and the tailgating crowd with these ads (judging by their placement on ESPN and the times), I’m not sure if this will bomb in a room full of straight guys watching the game together or simply make them uncomfortable as they try to decipher the innuendo. I mean I get it, it’s a European light beer with a gay man as spokesperson, perhaps they wanted to turn it all up to eleven and we’d hit the magic funny spot, but to me it just seems a little flat.”