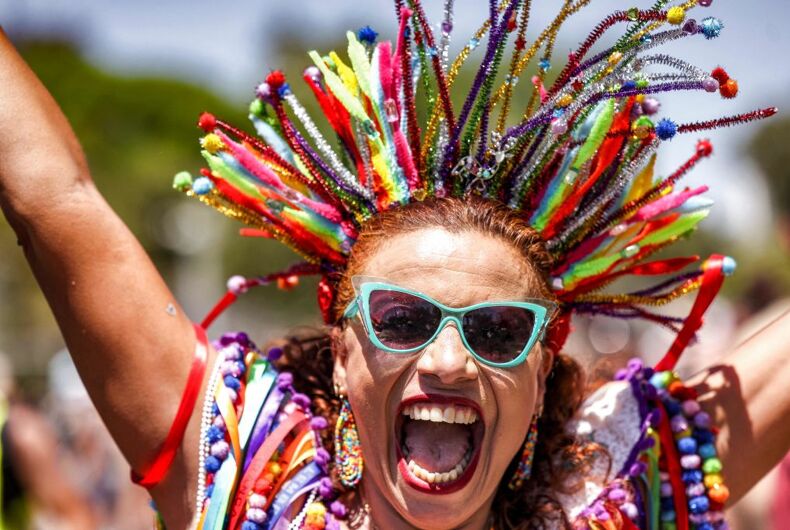 Not everyone who attends Pride events identifies as LGBTQ – some people just attend to be supportive allies, and no one can blame you for wanting a piece of the glittering action when Pride events just look so damn fun. But, if you’re a cisgender, straight person heading to a parade with some queer friends, or going to Pride events with your trans sibling has become an annual tradition, it’s important you’re able to be a good ally.

Not only do straight people need to practice allyship, but those of us in the LGBTQ community can and should be allies to one another, standing up and speaking out when something doesn’t sit right, especially if it harms a more disenfranchised member of the community.

Related: 6 queer musicians to add to your Pride playlist immediately

Let’s take a look at a few simple ways you can be the best ally this Pride.

1. Understand the true meaning of Pride

While Pride might look like one big party on the surface, it’s vital that everyone knows what it truly represents. You see, Pride isn’t just about listening to Cher and wearing your sparkliest outfit. While they’re all about celebration and unapologetic self-expression, Pride holds deep meaning and every time we take to the streets in modern times, we are standing on the shoulders of the activists who came before us.

If you want to show your support at Pride, the first step you can take is to get educated on the long struggle LGBTQ people have faced for Pride events to look how they do today. The history of Pride can’t be forgotten, as people made great sacrifices to allow us our freedoms.

A good starting place for getting clued up on what Pride is all about is some reading on the Stonewall Riots of the 1970s, which occurred at a time when LGBTQ people (Black trans women in particular) took a stand against police violence in a homophobic society.

2. Respect the bravery it takes to come out

You might assume that it’s easy for someone to be out when you see them living their best life at karaoke night in their favorite gay bar, or parading through the streets in a skimpy outfit. But, there’s a high chance it’s taken a lot of guts and courage for that person to exist as their true self.

Respecting the trauma that countless LGBTQ people have – either from childhood or following the reaction to their coming out – allows you to show compassion and truly value why Pride is still needed today – because people still fear being who they are and will go to extreme lengths to suppress that.

Yes, Pride is flamboyant and fun and fabulous, but it also isn’t just for your entertainment. If you want to be the best possible ally, celebrate the community’s strength with them, and appreciate that it might not have been a smooth ride getting to where they are now.

“Why don’t we have a straight Pride?” is a phrase thrown around every single year – but the reality is that straight people should be thankful they don’t need a Pride, because their identities are not policed or relentlessly punished in the same way, day in, day out.

At a time when homophobic and transphobic hate crimes and legislation are at higher rates than ever, recognizing your privilege could not be more crucial. This means ensuring you aren’t stepping on the toes of LGBTQ people or taking up their space. It means amplifying their voices rather than speaking for them. It means listening to their experiences, rather than assuming you already know. It also means being open to learning and accepting that you don’t have all the answers.

Being aware of your privilege means acknowledging that you will never have to fear holding a loved one’s hand in public because of your sexuality, or contemplate whether you could lose your job simply because of how you were born. Whether you are able to understand your privileges says a lot about your reasons for attending Pride, so please do so responsibly.

4. Don’t expect it to be all sunshine and rainbows

Pride is a great time all around, but it’s also likely to make you privy to things you’d rather not see. Whether it’s verbal abuse, bigoted protestors, acts of violence, or perhaps more subtle forms of homophobia or transphobia, sadly, these things happen when a group of people merely celebrate their existence and the hardships they’ve overcome.

In such instances, while they can be shocking to witness, it’s where your privilege comes into play as you should use it to do good.

Of course, you cannot speak on behalf of an LGBTQ person and should not try to fight their battles for them, but you can lift them up and be unashamedly on their side.

Call out hecklers and put them in their place and check in on your LGBTQ friends regularly. It’s a small task considering you aren’t the one bearing the brunt of the hatred.

5. Remember that Pride exists outside of parades and parties

Genuine allyship lasts all year long, not just when there’s a party. So, the best way to be an ally is to make a commitment and practice what you preach just as much on that rainy day in September or that snow day in late December as much as you do in sunny June.

Being an ally isn’t a subscription service you can opt out of. There aren’t package deals with options for when to show up. Being an ally is a full-time responsibility, and one anyone should feel proud to take on.

So, when the face paint is washed off and the glitter has been swept up, make sure you’re still as proud to stand with the community. LGBTQ people don’t suddenly stop being at risk or fearing for their lives once Pride ends, so why should allyship end then?