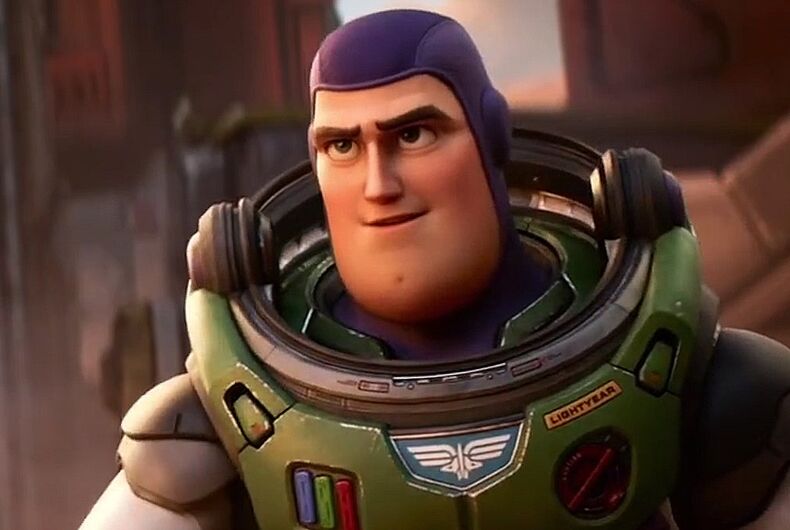 A movie theater in Oklahoma posted a sign over the weekend promising to “fast-forward” through a scene depicting a same-sex kiss in Disney’s new animated Pixar film Lightyear.

“Attention Parents: The management of this theatre discovered after booking ‘Lightyear’ that there is a same-sex kissing scene within the first 30 minutes of the Pixar movie,” the notice posted outside the 89er Theatre in Kingfisher, O.H., read. “We will do all we can to fast-forward through that scene, but it might not be exact.”

The sign was reportedly gone as of Monday, according to NBC News affiliate KFOR, and the spokesperson for the theater said they would not skip the scene in screenings. But Kingfisher residents were dismayed that it was ever posted in the first place.

“I don’t want my child to be afraid of anyone based on who they love or what their orientation is,” Jacqueline Williams says. “And I feel like that poster breeds fear.”

Patricia Kasbek tells NBC’s Out News that she left a voicemail with the theater, complaining about the sign.

“I told them that it was completely insulting for them to censor a same-gender kiss when they’ve never done this to an opposite-gender kiss.”

Alex Wade, the deputy director of Oklahomans for Equality says he’s not surprised something like this is happening in his state.

“But it does break my heart that young LGBTQ+ Oklahomans are made to feel like something is wrong with them,” he says. “This is why we develop chapters in rural Oklahoma to show everyone that there are people in their corner.”

The brief scene in the Toy Story spin-off merely shows a character giving her wife a chaste peck on the cheek, but that hasn’t stopped the film from sparking controversy. Disney initially cut the scene, but later restored it to the film after LGBTQ Pixar employees and allies sent a letter to the Walt Disney Company criticizing its censorship of “overtly gay affection” in its films. Disney has continued to refuse to remove the scene despite Lightyear being banned in 14 countries as a result.

“When same-sex couples show affection, even the most chaste of kisses, it is sexualized and treated as if it were explicit,” Wade says. “If this were a heterosexual couple, the theater would never even think of skipping it, because heterosexual couples are given the grace to be intimate without being shamed.”

5 ways to be a good ally at Pride events