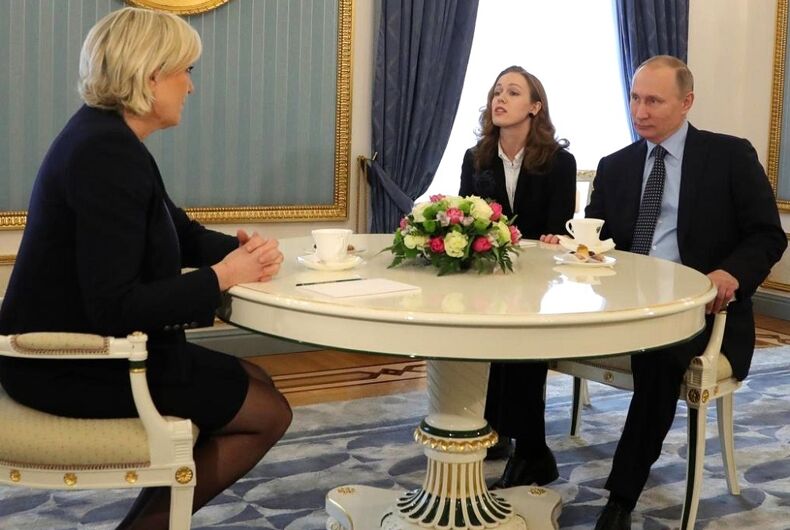 Marine Le Pen meeting with Vladimir Putin in March 2017. Rumors about financial support for her campaign from Russia have remained unconfirmed.Photo: Wikimedia Commons

For the past couple of months there have been many articles about French gay people who plan to vote for the proto-fascist rightwing candidate Marine Le Pen in the first round of presidential elections scheduled for this Sunday.

There’s something about this that European newspapers love to cover. Le Pen is opposed to gay rights, yet some gay men will vote for her! Left out is the fact that a minority of LGBT people vote for rightwing candidates in many countries and have done so for decades.

These articles generally follow a script: some unscientific polling showing that some percentage of gay people will be voting for Le Pen, followed by quotations from random white gay men found in the Marais – Paris’s overpriced historic gayborhood – about how LGBT issues aren’t the only reasons they vote, a couple alarmist quotes about how gay people are treated in Muslim-majority countries, and, voilà, a non-explanation of the phenomenon.

So I’ll give a shorter answer that comes from living in France as an openly gay man for a decade: there are French gay dumbfucks just like there are gay dumbfucks in every other country.

There are lots of gay people who, if they were straight, would be conservative. An overwhelming majority of gay people vote for the left in both the US and in France, and this is because LGBT issues often open up people’s minds a little and get them to start questioning the system of thought that produces rightwing votes.

While LGBT conservatives love to accuse the LGBT left of only voting on LGBT issues, the truth is that it becomes really hard to believe rightwing rhetoric on a number of issues when their wrong-ness is so obvious on such an important and personal issue.

For example, it’s hard to accept the rights’ “We don’t hate gay people, we just don’t believe in special rights!” when those “special rights” include not being fired for being gay. That skepticism, for many, crosses over to other issues, because it’s harder to believe someone on something you don’t know much about when they are lying to your face about something you do know a lot about.

A lot of LGBT people wake up to the fact that rightwing ideology is just a fig leaf to cover what is nothing more than a movement built around protecting and expanding the power of privileged groups of people.

But some people just won’t get it. So they end up saying stupid things as they try to reconcile what they believe to be a fair position on a number of issues with a clearly unjust position on one major issue.

Take, for example, this recent article from the BBC. This guy reconciles his support for the right with their hatred of him by saying that Marine Le Pen is really just lying about her opposition to same-sex marriage, and he knows this because he has a secret telepathic connection with her:

“Homosexuality itself isn’t the only thing I vote for,” Cedric tells us over a beer on one of the many terraces in Le Marais.[…]

We ask him if he’s worried about LGBT rights and, like most of the FN supporters we speak to, he thinks the same-sex marriage thing is a bluff: a ploy to win conservative votes.[…]

“In my view, she won’t do it. If the FN were to win, I think she would prioritise other things.”

But she’s only going to attack other minorities’ rights, not Cedric’s, because… magic?

Here’s another conservative the BBC found in the Marais.

“I don’t think she’s a threat to gay rights at all,” Baptiste tells us. He and his boyfriend Anthony are both voting for Marine Le Pen.

“It is true that maybe her father was more reluctant, but a lot of people in the political party now are homosexual and she never says she finds it unnatural.”

Well someone give her a cookie, she hasn’t called homosexuality “unnatural.”

Some people told the BBC about specific issues, like the economy or immigration, but that’s just a fancy way of saying “gay conservatives vote conservative because they’re conservative.” Straight conservatives also care about those issues, and leftwing queers do too but just end up reaching different conclusions.

It’s kind of like those stories published in the US about people who voted for Trump even though they’re married to undocumented immigrants or need Obamacare subsidies to pay for long-term treatments. They all found reasons to selectively listen to Trump’s promises and to tell themselves that he didn’t really mean the campaign promises that would negatively affect them.

Some people just aren’t going to think hard enough about why a politician they like is making promises that would hurt them personally. It’s just easier for some people to put their hands over their ears and shout “shut up Shut Up SHUT UP” than to rethink their entire worldview.

I never thought leopards would eat MY face, sobs the woman who voted for the leopards-eating-people's-faces-party @Cavalorn https://t.co/WmseAOyaN1