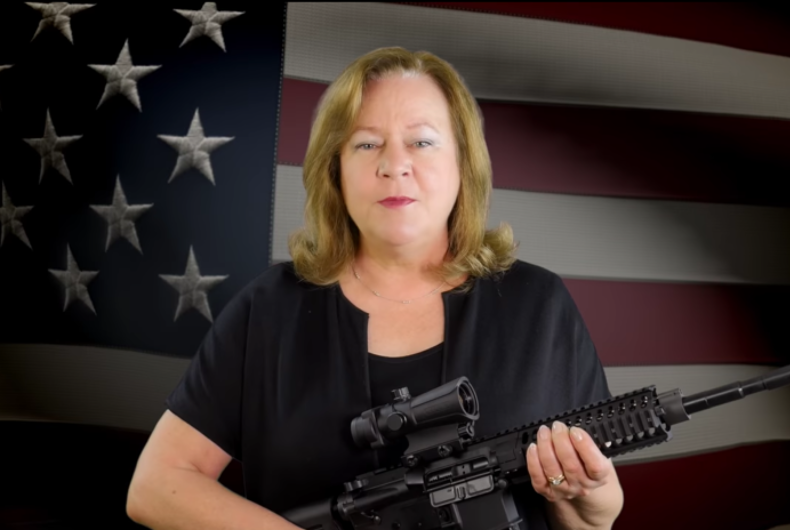 Sheri Few is one of several candidates running one of the most far-right campaigns in recent memory as she vies to represent South Carolina’s 5th Congressional District, pulling out all the stops to prove she isn’t a “weak politician.”

Few says she wants to “seize the moment,” and “reject political correctness.”

The Congressional seat Few hopes to win was left open when President Trump nominated Mick Mulvaney to head the Office of Management and Budget, and she wants to put herself in position to help the Trump agenda.

In her latest campaign ad, Few clutches a military style rifle and goes on a rant about politicians, two of whom are her opponents, who voted to take down the Confederate flag at the State House grounds. The decision came after Confederate flag fan Dylann Roof’s racially motivated attack during a prayer service at the Emanuel African Methodist Episcopal Church in Charleston that left nine people dead.

“Weak politicians are too quick to blame a horrible tragedy on a flag, or a gun, or even free speech, and that’s how bad laws are made,” Few says in her ad.

She adds that she would “speak the truth, seize the moment, and move our conservative agenda as fast and as far as we can.”

Rev. Eric S.C. Manning of Emanuel AME Church, where those nine people were murdered, denounced the ad and asked Few to take it down, calling out her campaign for using that tragedy for political gain.

Few is refusing to do so, while saying it is unfortunate that Manning feels the way he does.

“I would have never wanted that,” she said.

In another ad, Few said the removal of the flag “started a war on our history.”

Few, who has previously run unsuccessfully for the House of Representatives in 2010, and in 2014 for South Carolina Superintendent of Education (at which time she tried arguing for a scientific basis for intelligent design, bless her heart), also released an ad targeting LGBTQ members of the military and went after gay marriage.

Few says she opposes “radical Supreme Court decisions, like those that forced legal abortions and gay marriage on all 50 states.”

The spot also shows a member of the military with a rainbow badge as Few claims the Obama administration “dismantled our national defense.”

The special election takes place June 20, with a primary on May 2.

Hundreds of thousands raise awareness of bullying by silencing their voices