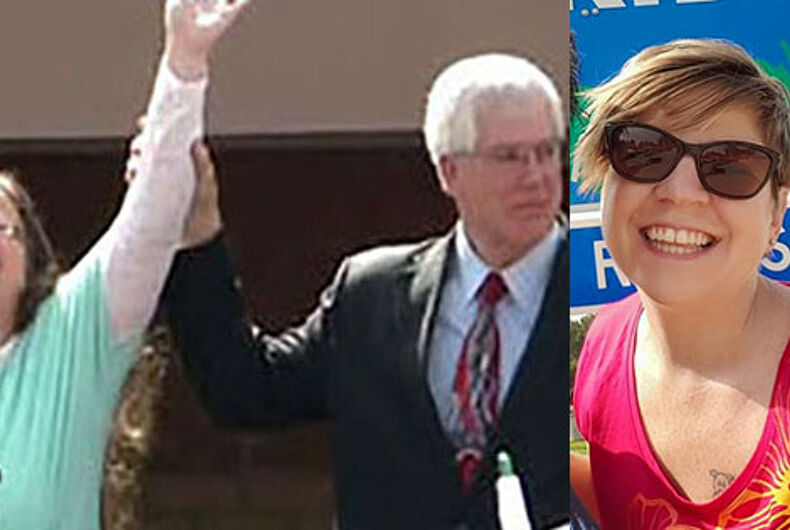 A lesbian who teaches math at a Tampa Bay, Florida high school is being silent on this Day of Silence, in response to accusations leveled at her by Liberty Counsel, the law firm and extremist organization that advocates for anti-LGBT discrimination. Its most famous client by far remains Kentucky clerk Kim Davis.

“No comment at this time,” was the response Friday morning sent via Facebook by the Gay, Lesbian & Straight Education Network of Tampa Bay. Riedas is co-chair of the nonprofit organization and also oversees the school’s Gay Straight Alliance. She is married to Valerie Churchman, who also teaches in Hillsborough County, and as of press time, has not individually replied to messages requesting comment sent to her by LGBTQ Nation.

READ MORE: Hundreds of thousands raise awareness of bullying by silencing their voices

The allegations against Riedas are in keeping with prior actions Liberty Counsel has made nationwide to earn it a black mark from the Southern Poverty Law Center, under the guise of “religious freedom.” In their letter to Superintendent Jeff Eakins, attorneys McAlister and Mast claim:

Ms. Riedas has prohibited at least three children from wearing Christian cross necklaces in her classroom, claiming on occasion that they are ‘gang symbols.’

She allegedly told one student represented by Liberty Counsel, “That’s disrespectful; you have to take it off.”

A press release posted on Liberty Counsel’s website drags Riedas’s wife into this, calling Churchman her “lesbian partner,” and noting she also teaches at Riverview. Although it’s not mentioned in the complaint, the lawyers felt it necessary to point out that Churchman “dressed as a nun for school spirit week, complete with a ‘cross necklace’ made of skulls. She tweeted she has ‘a bad habit’ and the point is to be ‘creepy.’”

The letter to the superintendent also claims Riedas has engaged in impermissible LGBT political activism in the classroom, and has indicated her intent to further do so during instructional time, and cites Friday’s Day of Silence as an example. Riedas, the letter states, does so “to promote GLSEN’s views about homosexuality and gender confusion.”

The lawyers also argue that Riedas’s classroom “is permanently decorated with LGBT political themes, including a large display on her wall stating ‘Ally,’ a ‘Safe Space’ poster and door sticker, and assorted other LGBT promotional material, including buttons prominently displayed on her desk, facing students, stating ‘I Love My LGBT Students’ and ‘Proud Public Employee.’ These buttons make other students feel marginalized and excluded, and not full members of the classroom community,” they write. They’re also up in arms that she dared to put rainbow stickers on her students’ folders.

The attorneys also cite pro-LGBTQ tweets by Riedas that they allege are “not part of Ms. Riedas’ education duties, and violates District policy.”

Here's how to talk to kids about what it means to be an LGBTQ ally https://t.co/FgAb7bPSIx via @huffpostqueer

The 5-page complaint accuses Riedas of violating the Code of Ethics of the Education Profession of Florida, of intentionally violating or denying students’ legal rights, along with other ethical and moral violations.

A spokesperson for the Hillsborough County Public Schools, Tanya Arja, sent LGBTQ Nation this statement in response to our inquiry:

As of press time, Arja did not address the demands laid out by the Liberty Counsel lawyers:

2) prohibit Ms. Riedas from promoting LGBT political activism during instructional time on April 21, or at any other time, using any of the attached ideas in GLSEN’s “guide;”

3) require Ms. Riedas to remove partisan political LGBT materials from her classroom, and remove all unrequested LGBT stickers from each student’s notebook; and

4) replace her as sponsor of GSA, and appoint a teacher of the District’s choice who can be trusted to be present at non-school-sponsored student clubs like GSA in a supervisory, not activist, capacity.

Liberty Counsel states in its demands that if Superintendent Eakins does not meet them by the close of business Friday, the firm will “take further action to prevent irreparable harm to the rights of our clients. If a federal lawsuit for civil rights violations becomes necessary to vindicate the parental and student rights, it may include any appropriate parties in their individual, as well as official, capacities.”