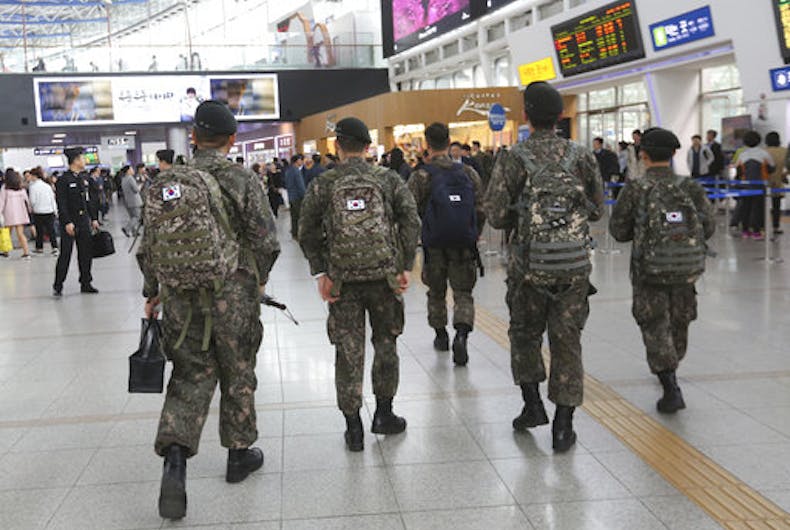 In this Thursday, April 20, 2017 photo, South Korean army soldiers walk to take their trains at Seoul Railway Station in Seoul, South Korea. A watchdog group says South Korea's army is hunting down and prosecuting gay servicemen after a video of two male soldiers having sex was posted on the internet earlier this year, stoking fear in an already persecuted minority group. Photo: (AP Photo/Ahn Young-joon)

A watchdog group says South Korea’s army is hunting down and prosecuting gay servicemen after a video of two male soldiers having sex was posted on the internet earlier this year, stoking fear in an already persecuted minority group.

Military investigators looking into the case have threatened soldiers to out their gay peers, confiscated cellphones to check communication records, and even used dating apps to dupe soldiers into revealing their sexual identity, said Lim Tae-hoon, the head of the Military Human Rights Center for Korea, which tracks down abuses in the armed forces.

South Korea’s army says it’s conducting a proper criminal investigation into soldiers allegedly involved with filming and uploading the video, which is a violation of the country’s communications laws and a military penal code that makes homosexual activity punishable by up to two years in prison. The army has denied allegations that investigators are using the case to embark on a broader mission to weed out gay soldiers.

“Military investigators used the information they gained from the investigation on the sex video to track down other gay soldiers in the army, starting by forcing the suspects to identify who they had sex with and then widening their search from there,” said Lim, who said a soldier tipped his group off about the alleged crackdown.

In conservative South Korea, gays, lesbians, bisexual and transgender people are harshly stigmatized and struggle to be politically visible, while a powerful Christian lobby immobilizes politicians seeking to pass anti-discrimination laws. That stigma is amplified in the military, where most able-bodied South Korean men are required to serve about two years as the country maintains a large force in the face of potential conflict with North Korea.

Gay men are not exempt from conscription but are banned from engaging in homosexual activity while serving, leading to an environment in which they serve without revealing their sexual identity for fear of discrimination and reprisals.

“South Korea’s military doesn’t exclude gay men from compulsory duty, but once they enter the military, they are seen as dangerous and treated as potential criminals, as the ongoing army investigation shows,” said Han Ga-ram, an openly gay human rights lawyer.

He said the investigation had “touched off fear in the LGBT community.”

“Hate crimes against LGBT people are already a serious problem, and the government could make it worse by sending the wrong message by punishing gay men in the military,” Han said.

The army doesn’t reveal information about how often it pursues cases against gay soldiers, but Lim said in the five years before 2017 he knows of only two cases where soldiers were prosecuted for homosexual activity. Since the start of the year, more than 30 soldiers have come under investigation and one has been arrested, an army captain who did not know the soldiers involved, Lim said.

“The soldiers who are being investigated had sex with their partners under mutual consent and not inside the barracks,” Lim said. “The army has infringed on the realms of privacy and is falsely claiming that these soldiers committed wrongdoings.”

Lim said the arrested captain had never met the soldier who uploaded the video and he was arrested for allegedly obstructing the investigation by delaying his appearance for questioning due to his lawyer’s schedule. The captain’s lawyer could not be reached for comment.

Lim’s group in 2014 uncovered the bullying death of a 21-year-old army conscript, a case that shocked the nation and led to calls for the Defense Ministry to take serious steps to reduce bullying and hazing in the military.

The army didn’t provide details of its investigation into the video, including the number of soldiers being investigated or why the captain was arrested. It said in a statement that the investigation was proceeding legally and that the privacy of soldiers was being protected.

The army also stressed that homosexual activity in the military is banned to allow soldiers to maintain “sound and healthy private lives.”

“The army will continue to deal with activities that disrupt the discipline of troops based on related laws,” the army said in a statement.

South Korea’s stance runs counter to that of the United States, which maintains bases in the country and is its largest ally. In 2011, the U.S. repealed its policy, known as don’t ask, don’t tell, which banned open homosexuality in the military. It now allows service members to reveal they are gay without fear of investigation or discharge.