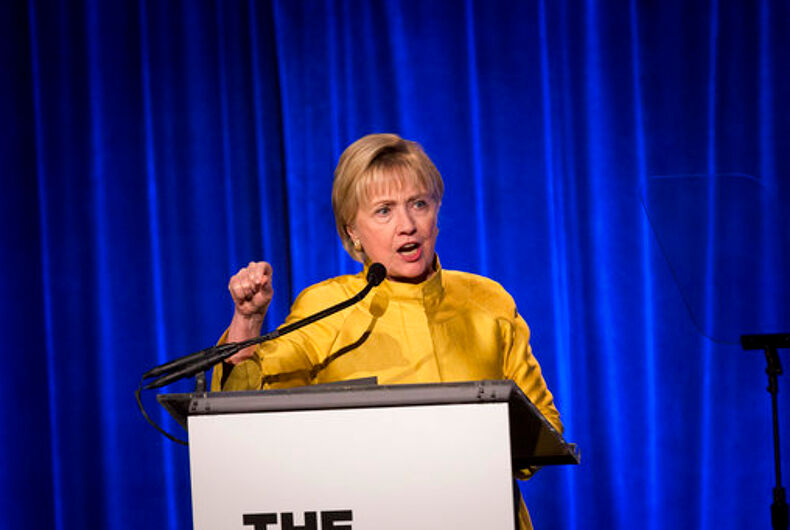 Former Secretary of State Hillary Clinton tries to inspire the LGBTQ community to "resist, insist, persist, and enlist" in the face of uncertainty after accepting the Trailblazer Award during the LGBT Community Center Dinner Thursday, April 20, 2017, in New York. Photo: AP Photo/Kevin Hagen

Hillary Clinton reiterated her support for the global LGBTQ community — and encouraged its members to stay engaged in the struggle for equality — at last night’s fundraising dinner for The Center, the AP reports.

“Gay rights are human rights, and human rights are gay rights,” the former secretary of state said to enthusiastic applause, repeating the groundbreaking statement she first uttered in Geneva in 2011.

“We’ve heard terrifying accounts from Chechnya of gay and bisexual men being taken from their homes and families, tortured, even killed,” Clinton said, urging Trump to take action. “The United States government — yes, this government — should demand an end to the persecution of innocent people.”

Unfortunately, she noted, the Trump administration cannot be trusted to protect LGBTQ people, at home or abroad.

“We may not ever be able to count on this administration to lead on LGBT issues,” Clinton said after receiving an award from the LGBTQ community center. “The progress that we fought for, that many of you were on the front lines for….It may not be as secure as we once expected.”

She described the “clouds gathering on the horizon,” lamenting cuts to HIV/AIDS funding and the administration’s rollback of trans student protections.

“When this administration rescinded protections for transgender students, my heart broke,” Clinton said. “When I learned about the proposed cuts in funding for HIV and AIDS research, I thought about all of our efforts to try and achieve an AIDS-free generation.”

But despite these recent defeats — including her own in the presidential election — Clinton encouraged the audience to remain active and engaged.

“I know the election hit a lot of us hard,” Clinton said knowingly. “I can tell you this: Even when it feels tempting to pull the covers over your heads, please keep going.”

Clinton maintained a low profile following her unexpected loss to Trump and told the crowd that she spent a lot of time in nature and catching up on sleep. But she didn’t go into hibernation. Instead, she came up with a new mantra.

“When a good friend or loved one says, ‘Quit yelling at the television set,'” she said, “Just remember: we need to resist, insist, persist and enlist.”

But her speech wasn’t all heavy. The former First Lady laughed freely, poking fun at herself, and showing off her (or her speech writer’s) knowledge of gay culture.

She noted that she’d had to choose between attending the fundraising dinner or seeing Bette Midler perform in “Hello, Dolly!”

“I really struggled to figure out which event would best reflect my commitment to the community,” Clinton said. So, she heeded the call of the show’s song “Put On Your Sunday Clothes,” and came to dinner.