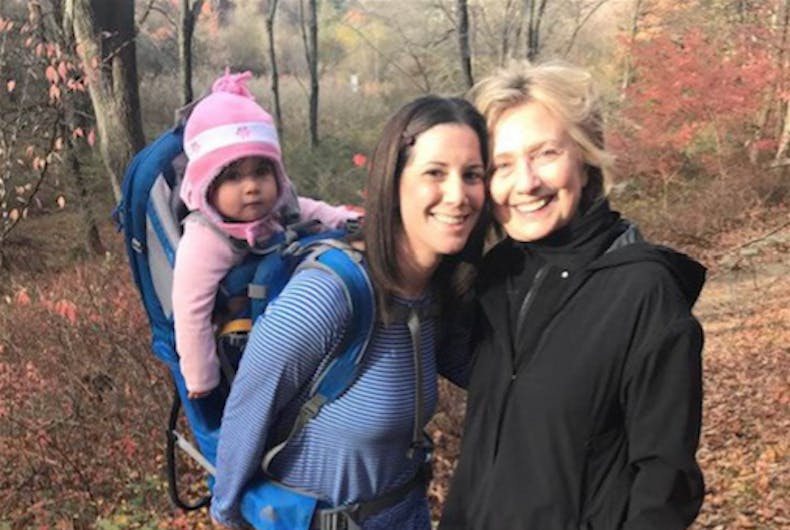 A New York woman took to the woods for a calming post-election hike. It turned out that Hillary Clinton had the same idea.Photo: Via Facebook

Many of us take to nature when the world gets us down. And as one New York women recently discovered, so does Hillary Clinton.

Margot Gerster of Chappaqua, New York, shared on Facebook that she was out for a post-election hike with her daughters when she crossed paths with the Democratic presidential candidate and her husband Bill.

“I’ve been feeling so heartbroken since yesterday’s election and decided what better way to relax than take my girls hiking,” Gerster wrote, according to New York magazine (the post is no longer publicly visible). “We were the only ones there and it was so beautiful and relaxing. As we were leaving, I heard a bit of rustling coming towards me and as I stepped into the clearing there she was, Hillary Clinton and Bill with their dogs doing exactly the same thing as I was.”

In that emotional moment, she said she got a hug, chat, and photo with the former Secretary of State.

“I got to…tell her that one of my most proudest moments as a mother was taking Phoebe with me to vote for her,” Gerster said. “She hugged me and thanked me and we exchanged some sweet pleasantries and then I let them continue their walk.”

It was just the thing she needed in a time of despair.

“Now, I’m not one for signs but I think I’ll definitely take this one,” she wrote. “So proud. #iamstillwithher #lovetrumpshate #keepfighting #lightfollowsdarkness”