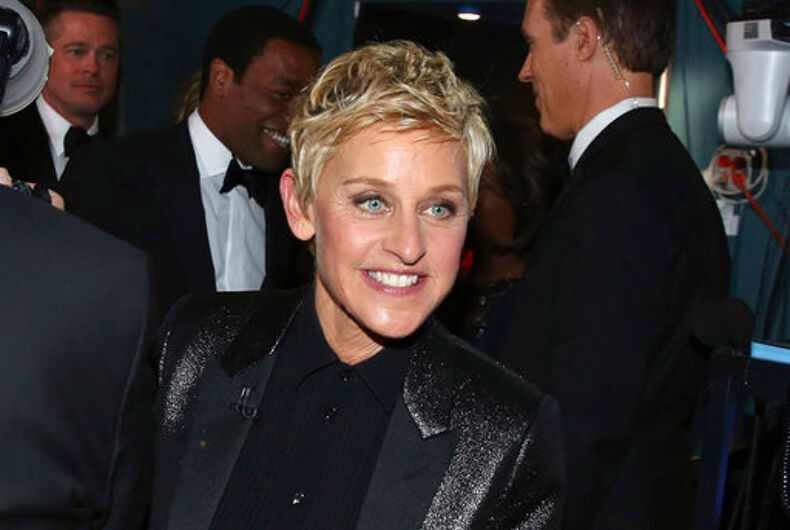 FILE - In this March 2, 2014 file photo, Ellen DeGeneres appears backstage during the Oscars in Los Angeles. DeGeneres made history 20 years ago as the first prime-time lead on network TV to come out, capturing the hearts of supporters gay and straight amid a swirl of hate mail, death threats and, ultimately, dark times on and off the screen. Photo: (Photo by Matt Sayles/Invision/AP, File)

Ellen DeGeneres can measure her career and personal success by several impressive yardsticks, including a popular daytime talk show and eight-year marriage to Portia de Rossi.

But two decades ago, as star of the ABC sitcom “Ellen,” she put herself and her career on the line when she came out as gay and her character followed suit in “The Puppy Episode” that aired April 30, 1997.

The title itself is a clue to how difficult it was to get it made. When the show’s writers raised the unprecedented prime-time broadcast storyline with Michael Eisner, then-CEO of ABC’s parent Walt Disney Co., he suggested the character instead get a puppy, DeGeneres recalled.

As she prepared to mark the culture-changing event Friday on “The Ellen DeGeneres Show,” she looked back at what she faced in creating the episode and what came after.

The Associated Press: How difficult was it to decide to come out both personally and in character, and do it simultaneously?

DeGeneres: I was doing just fine. The show was a success, my career was a success and there was no real reason for me to do it other than I did some work on myself, some deep soul-searching, and realized I was really carrying around a lot of shame. … No matter how many times I tried to rationalize that I didn’t need anyone to know, I knew that it was a secret. And I knew that there was a possibility that people would hate me for the simple fact that no matter how much they loved my comedy or my show, but they might hate me if they knew I was gay.

It became more important to me than my career. I suddenly said, “Why am I being, you know, ashamed of who I am just to be successful and famous in society’s eyes?” … And then I thought, the character on the show is clearly struggling. There’s no relationship. It was pretty clear it would be an easy transition for her to realize she was gay, which was why her relationships with men weren’t working out.

AP: How were the studio and network to work with during the script development and production?

DeGeneres: They really didn’t give us the OK (at first). We were trying to convince them to do it, and there were closed-door meetings. And the scripts were written on red paper so you couldn’t see the black ink. They were shredded at the end of every single day and locked in a safe. It was crazy. It was like we were spies or something.

AP: “Ellen” cast member Joely Fisher recalled that you held back from saying the line “I’m gay” in pre-taping rehearsals. Why?

DeGeneres: Because the first time we were blocking it and rehearsing it (the scene), I started to say it and I would tear up. And I realized how charged that sentence was because, you know, when you’re gay, the only time you say “I’m gay” is when you’re revealing it to someone, when you’re telling your parents or when you’re telling someone close to you. Because most people never have to say, “I’m straight.” …. So Laura (guest star Laura Dern) kept saying, “Just don’t say it,” because she saw how hard it was for me.

AP: How were you affected by the criticism that you, the show and your co-stars received?

DeGeneres: I knew I was risking hurting my career. … But to know that Laura Dern was punished for it just because she played my love interest in that show is crazy. I mean, she’s a brilliant actress, she’s heterosexual and yet she was punished. And Oprah (Winfrey) got hate mail just for being a part of it. Obviously, that’s why a lot of people don’t come out, because there’s a very loud and clear message … that a lot of people don’t understand it (being gay), and because they don’t understand it they fear, and because they fear it they hate it. But I had no idea the amount of hate. I had no idea that there would be death threats or a bomb scare. It was a really scary time.

AP: You have a hit talk show and merchandise lines. Is that affirmation or not of where you and society are now?

DeGeneres: You can look around and see that there’s still a lot of work to be done. There are always going to be people who just are stuck in their heads on what gay means. … Nobody really understood how dark it got for me. I was really, really in a deep depression. I had never been so down in my life. I was depressed. I was broke. I felt attacked. It was everything that you just fear in life, like nobody loving you. For me to crawl out of that and to accomplish what I’ve accomplished with the show and with my brand and with my production company, and to succeed after all that …. (It) makes me realize that no matter how dark something gets, and no matter how bad something gets, that there’s always a possibility of good coming from it. You have to just hold on and know that something good will come from it and there’s always a lesson in everything.