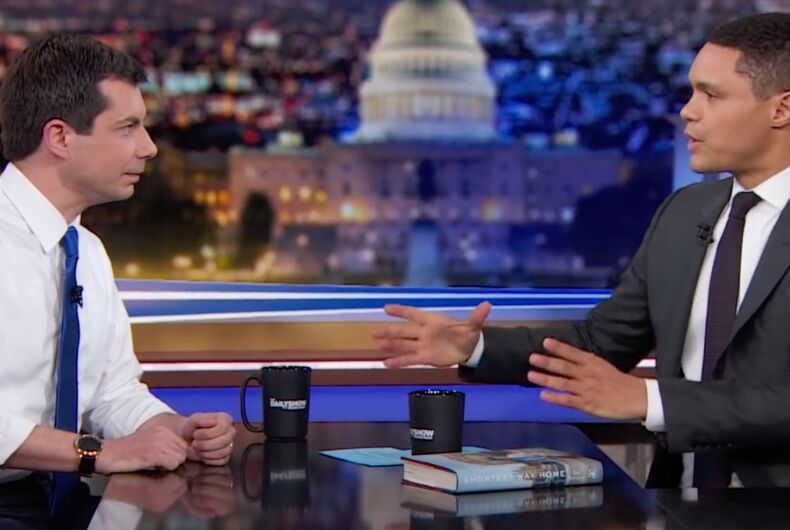 Pete Buttigieg, the current mayor of South Bend, Indiana visited The Daily Show on Monday, and host Trevor Noah had many questions for the out gay presidential candidate.

“It’s been quite a ride for you, man. It’s been a whirlwind. Three months ago, most of the people in the country did not know your name and now, as it stands, you are sitting at number three in the polling,” started Noah.

Noah then questioned Buttigieg about his rise, and if the candidate has benefitted from white privilege.

Related: The false sexual assault allegation against Pete Buttigieg was orchestrated by a far-right activist

“I’d like to think it’s my qualities and my message,” Buttigieg responded, “but I’ve been reflecting on this because one of the things about privilege is that you don’t think about it very much. It’s being in an out group where you are constantly reminded of it. It’s not when you’re in a majority or a privileged group.”

“And so I try to check myself and try to understand the factors that help explain why things are going well. Then again, there is a lot of ups and downs. We’re having a good moment. But I am under no illusion it’s going to stay like this indefinitely. We’re going to have a lot of challenges.”

“I do think that there’s a media environment that kind of pushes people into lanes, whether they comfortably fit there or not, and I do think it’s simply harder for candidates of color or for female candidates; I’m very mindful of that,” Buttigieg added.

“The only thing I know how to do about that is to be true to a message and a vision that’s meaningful and to be as respectful as I can to the others. I don’t view myself as having opponents, but competitors, and I think each of us needs to compete based on what we have to offer.”

Noah discussed the ongoing feud with Mike Pence, focusing on religion in America, and Buttigieg’s belief in the power of the “religious left.”

I think there’s a great tradition of the religious left that’s not getting enough attention,” said Buttigieg. “I mean, you look at the civil rights movement, which is certainly a product of the religious left in some senses. You look at the work going on right now in order to help lift up the conditions for immigrants at the border, to poor people across this country.”

“What I think it signals to us is that we’ve got to do away with idea that the only way you can think of the implications is religion and politics is from a right-wing perspective.”

Noah also asked about what Buttigieg’s would hope to accomplish on his first day as President, noting that neither Obama or Trump were truly able to fulfill their own day 1 plans.

“I think, Day One, you launch a package of Democratic reforms to strengthen our democracy… making voter registration easier, making it easier to get to the polls, but also launching things that are going to take years to achieve, launching a reform to the Electoral College based on the idea that you might say is simplistic but you want to give the presidency to whoever gets the most votes, launching a commission to propose measures that would depoliticize the Supreme Court. I mean big deep structural reforms that need to happen.”

Watch the whole exchange below, including discussions about outreach to black voters, climate change, and his lack of specific policies on his website: