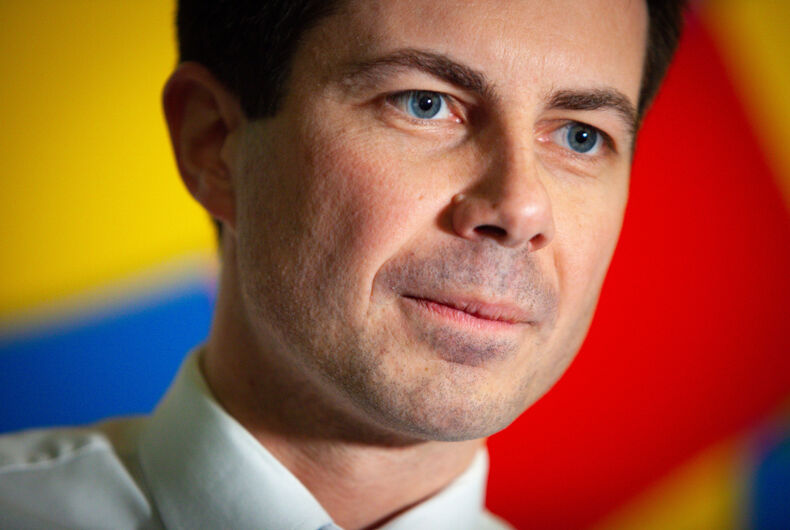 I am a gay conservative and a sexual assault survivor; I vote Republican and sometimes support President Trump and sometimes strongly oppose him. I am a strong advocate for survivors and for Due Process and I am highly critical of how I see the media portray both important issues.

I like Mayor Pete but I probably won’t vote for him because we differ too greatly on important policy issues. That being said, the false accusation against him was beyond the scope of dirty politics and well into what should be considered illegal, criminal behavior.

No amount of political ideological loyalty would allow me to support a false claim for the potential of a greater political good. Unfortunately, this is not being honored by many on my side of the spectrum.

Despite the humiliating and sadly predictable revelation that the sexual assault accusation against Democratic potential Pete Buttigieg was concocted by far-right activists to specifically harm the candidate in favor of Trump, a new flame of conspiracy trutherism has been ignited, championed by a leading voice in gay Republican activism.

Related: The Gays For Trump rally in DC went about like you’d expect

Believing the young man in question, Hunter Kelly, to be suspect in the overall claim, GaysForTrump founder Peter Boykin collected the available published information on the case and provided exclusive content given to him by Jacob Wohl, one of the alleged masterminds behind the plot.

Exclusive Video: Who Do We Believe? Pete Buttigieg Accuser? Leftist Media? You Decide but its NOT over yet.. https://t.co/DkErzjtyDQ via @peterboykin

The in-depth article provides Boykin’s retelling of the conversation he had with Wohl and his immediate thoughts afterward.

“Jacob told me over the phone about the account that Hunter had contacted both Jacob and Jack about the very strong statement that Hunter wanted to make, that Pete Buttigieg had sexually assaulted him,” he writes.

“Jacob was upset that Hunter now is doing a 180 and retracting everything that he had said now that the pressure was on him. Now, personally after reading all the article and accounts, I don’t understand why Hunter would fly all the way to meet with these two individuals if there were nothing going on.”

Boykin further tweeted out to his 100k+ followers speculation that Kelly had been intimidated into recanting.

Here's the problem
Why would Hunter fly all the way there… Either he was part of the scheme and pulled out after he worried he would get in trouble. Or he legitimately went there to give testimony but then the DNC & Media threatened him to change his tune or he got paid off https://t.co/gOyXGrj04w

To back this claim up, Boykin states in the article, “As Jacob explained, he stated that when Hunter got there is was excited to get this story out, he gladly contacted news agencies to give interviews and to bring Pete Buttigieg to justice. But, what happened quickly is that the media started to contact Hunter’s family, his work, and him and started to harass his family, as Jacob stated that the Democrats had basically stated they would bankrupt Hunter’s whole family and make their lives a living hell if Hunter did not quickly retract his accusations against Buttigieg. This scared Hunter, and at that time it is when he had his sister and her husband come and get him.”

Boykin finishes his article with this thought.

“I take no sides. Except for this, if the left can constantly bring someone forward to accuse someone of assault or the whole #MeToo even if that person doing the accusing is #FakeNews, why are we supposed to believe them, yet quickly ignore Hunter? I know that the right is pretty good at not falling for #FakeNews, but honestly if we take into account how the left treats these cases, don’t you think this accusation against Pete Buttigieg deserves a fair follow through before we dismiss it?”

Of course, the facts of the story have already dismissed it and it needs no further investigation. The young man clearly stated he was not sexually assaulted by Buttigieg and that Wohl intentionally fabricated the story using his name.

It should be remembered that Wohl was caught fabricating another sexual assault story for publicity to protect Trump when he promised to provide proof Robert Mueller sexually assaulted a woman.

Since tweeting this, two young, gay, right-leaning men I know have contacted me to say they were also approached by Wohl to participate in this appalling attempted smear of @PeteButtigieg https://t.co/jyq9Q044iL

Vox reporter, Jane Coaston, who provided a remarkably detailed account of this pattern, states, “Wohl is a die-hard Donald Trump supporter whose off-the-wall claims are all about standing by the president. Before the Mueller debacle, Wohl’s eventual ban from Twitter, and now an attempted smear campaign aimed at a Democratic presidential candidate, he was best known for tweets about how Trump should be president for life, or how liberals in ‘hipster coffee shops’ secretly love Trump, and occasionally accusing presidential candidate Kamala Harris of being ineligible to run for the White House (which was false).”

Unfortunately, Boykin seems to be following the same logic in his self-reported search for the “truth” of the matter.

Many of us on the right view the more extreme Trump supporters as something of a cult, willing to do whatever it takes to defend their iconic hero. Blinded by this ill-fated loyalty, Boykin, Jim Hoft and a number of other gay Republican advocates are undermining their very argument of independent thinking and political autonomy and validating much of what progressive LGBT believes is true about gay conservatives.

This new push to dig into an imaginary cover-up by the DNC and the media is embarrassing and deeply harmful to those fighting for victims of sexual assault and, naturally, for gay conservatives uninterested in this kind of tabloid dirty politics. It should be considered fringe, unsupported by the majority of Republicans and not representative of gay voices on the right.

Pete Buttigieg is a good and decent man running a meaningful campaign and while I strongly disagree with him on many positions, I will stand up for him against false accusations, no matter where they come from. We should all do the same.

The sad truth is that many on the right fear Trump may not do as well in 2020 as he did in 2016 and many are becoming desperate. This latest attempt to shore up support based on imaginary villains is just another example of how far they are willing to go in their efforts.

I encourage everyone interested in politics on the LGBTQ spectrum to stand up for Mayor Pete in this and continue exposing this profoundly disturbing lie. Whatever justification Boykin and those engaging in this conspiracy believe they are fighting for, it is destructive to all of us and must be exposed, shamed and dismissed.

On this we should all agree.

Chad Felix Greene is a political and social writer focusing primarily on truth in media and advocating for conservative political positions. He is active on twitter and routinely contributes to conservative publications.

The first black female soldier passed Ranger School. Then she proposed to her girlfriend.