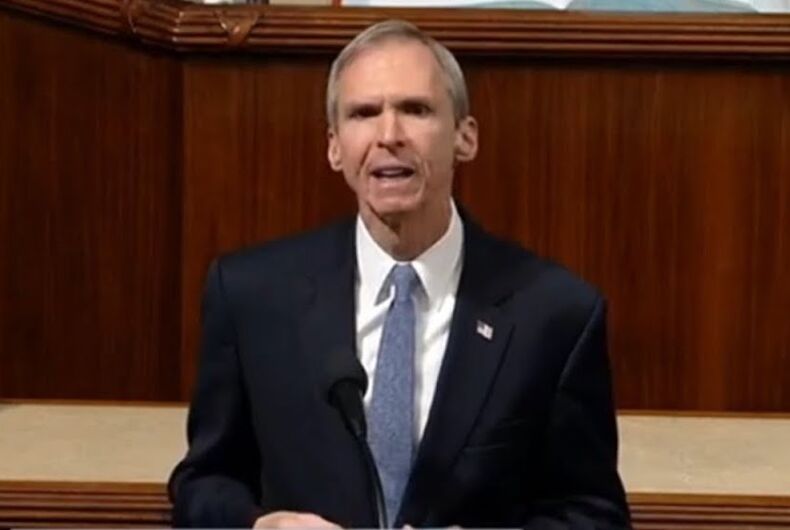 Related: Meet the 8 Republicans who voted in favor of the Equality Act — they’re not all angels

Lipinski got scores of 58, 57, and 38 out of 100 in the last three HRC Congressional Scorecards, far below the near-perfect 100’s other Democrats from Illinois got on the most recent scorecard.

He also opposed other progressive priorities like women’s reproductive rights, the Affordable Care Act, and the DREAM Act.

Newman, a business consultant and founder of “Team Up to Stop Bullying,” ran to the left of Lipinski as “a state and national advocate for health care rights, income equality, LGBTQ+ rights, and common-sense gun safety,” according to her website. She had narrowly lost to Lipinski in 2018 before beating him last night.

House Minority Leader Nancy Pelosi (D-CA) endorsed Lipinski in 2018 even though he repeatedly voted against legislation she championed and even opposed the re-election campaign of then President Barack Obama.

Lipinski, who is Catholic, began serving in the U.S. House of Representatives in 2005. In 2006, he voted “present” on the proposed Constitutional amendment to ban same-sex marriage, and in 2007 he voted against the Employment Non-Discrimination Act.

He was the only Democrat to co-sponsor the 2015 First Amendment Defense Act, which would’ve allowed Christian anti-LGBTQ discrimination under the guise of “religious freedom.” In 2016, he supported the Religious Freedom Restoration Act, which would’ve permitted businesses to discriminate against LGBTQ people. Lipinski was also supported by the anti-LGBTQ Illinois Family Institute for his voting record.

Lipinski opposed the Equality Act — federal legislation approved by the House that would add sexual orientation and gender identity to the Civil Rights Act of 1964, offering protections in housing, employment, public accommodations, education, credit, and several other areas. Sen. Joe Manchin (D-WV) was the only other Congressional Democratic besides Lipinski to oppose it.

Lipinski eventually pledged to vote for the Equality Act in May 2019 after Newman started highlighting his opposition to it in her campaign ads. But even then, he said he’d only do so if the bill did “more to ensure religious liberty.”

Despite his anti-LGBTQ votes, Lipinski did vote in favor of repealing “Don’t Ask, Don’t Tell,” the ban on out gay military members, and in favor of federal hate crimes for queerbashing.

In a statement, Alexandra Rojas, executive director of Justice Democrats, said of Newman’s victory, “This is a critical victory for the progressive movement in showing that voters are ready for a new generation of progressive leadership in the Democratic Party.”

Rojas continued, “This isn’t just a loss for one incumbent. It’s a defeat for machine politics and big corporate donors who want to stop our movement for ‘Medicare for all,’ a Green New Deal, and reproductive rights.”

Lesbian doctor with coronavirus documents her illness on video