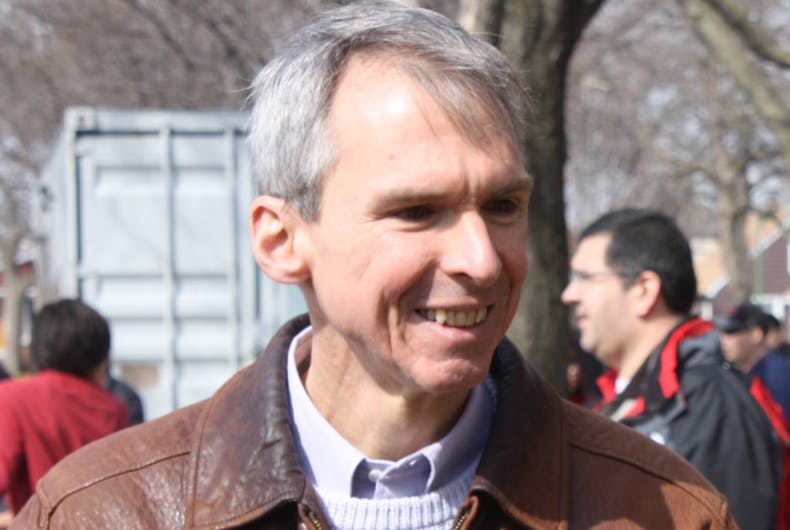 Illinois Congressman Dan Lipinski has announced that he will vote in favor of the Equality Act when it comes to a floor vote on Friday morning.

Lipinski was the lone holdout among House Democrats to oppose the legislation. He is also the only Democrat not to co-sponsor the bill to add LGBTQ nondiscrimination protections to existing federal law. The legislation has Republican co-sponsors and national polling shows the majority of Americans support it.

The Congressman had cited concerns about “religious liberty” as his reason for opposition, but his voting history shows that when it comes to LGBTQ rights, Illinois Congressman Dan Lipinski is the worst. Literally.

Related: Progressives have targeted the only Democrat who doesn’t support the Equality Act

“Religion is an American value that’s treasured in this country – including for the LGBTQ community – and is not compromised in any way by ensuring equal rights and dignity for all people,” Zeke Stokes, the Chief Programs Officer for GLAAD, tweeted after news broke that Lipinski would change his stance.

“All Americans deserve equal treatment under the law and should have these rights protected, including individuals in the LGBT community,” Lipinski said on the House floor yesterday as he announced his change of heart. “At the same time, the free exercise of religious belief is a core ideal of our country, protected in the Constitution and through federal law.”
“It is critical to ensure that religious freedom stands a chance to be fully lived out and fairly treated in court. This week, I will vote for the Equality Act for the broader goal. But before it becomes law, we must do more to ensure religious liberty.”

While many progressive advocacy groups for different issues worked together to recruit and support a primary challenger in Lipinski’s last election, he won the first round by a narrow margin and cruised to victory in the general election because his Republican opponent was a self-described Nazi. Even fellow Illinois Democratic Congresswoman Jan Schakowsky endorsed his primary opponent.

Now the coalition is gathering to primary Lipinski again and shift the solidly Democratic district to a progressive candidate, his former challenger, Marie Newman. And his lack of support for LGBTQ rights has been one of the issues she’s been pointing out.

“There’s one House Democrat — one in the whole country — who doesn’t support this civil rights legislation: Dan Lipinski,” Newman wrote in a fundraising email. “Once again, he’s bucking the Democratic Party to stand against equality, something he’s done consistently throughout his 14 years in Congress.”

Lipinski conveniently announced he will vote for nondiscrimination protections after Newman started hitting him on the issue regularly.

West Virginia Senator Joe Manchin remains the only Democrat in the Senate to oppose the legislation.