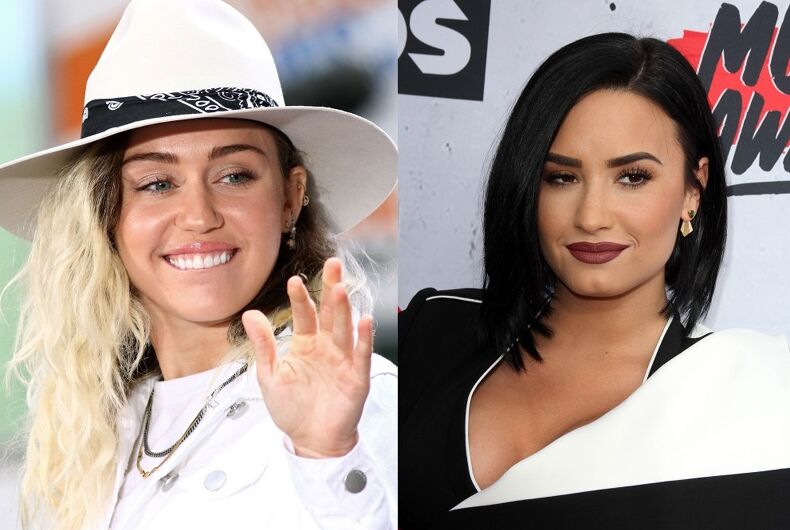 Musicians Miley Cyrus and Demi Lovato joked about being friends because they’re both “gay as f**k” on social media.

Both singers are currently in isolation due to coronavirus, but they got together on Instagram live last night to take questions from fans.

Related: Miley Cyrus teamed up with Converse for a new Pride sneaker collection

The women have a lot in common. Both are singers, both are 27 years old, both starred in Disney Channel shows when they were kids… and they’re both LGBTQ. Cyrus identifies as pansexual, and Lovato is sexually fluid and has said that she is still “figuring it out.”

A fan asked them about their friendship.

“We connected then because we just saw something in each other,” Lovato explained.

“Maybe it was spirituality or maybe it was just our hearts. I don’t know, but um….” she trailed off.

“Or maybe we’re just gay as f**k,” Cyrus chimed in. Lovato cracked up and then they took the next question.

Both women have also been open with fans about their queerness. Lovato has talked about being open to dating women in the past and has told Ellen several times that she wants to make out with Rihanna.

She also talked about coming out to her parents, how she was “overwhelmed” but also how their acceptance of her was “beautiful and amazing.”

Cyrus, who was photographed by paparazzi making out with the ex-girlfriend of a member of Caitlyn Jenner’s family after she divorced her husband, has integrated queerness into her art and her philanthropy as well.

The most anti-LGBTQ Democrat in Congress lost his primary

Biden will be the nominee. I am already nauseous but he has my vote.