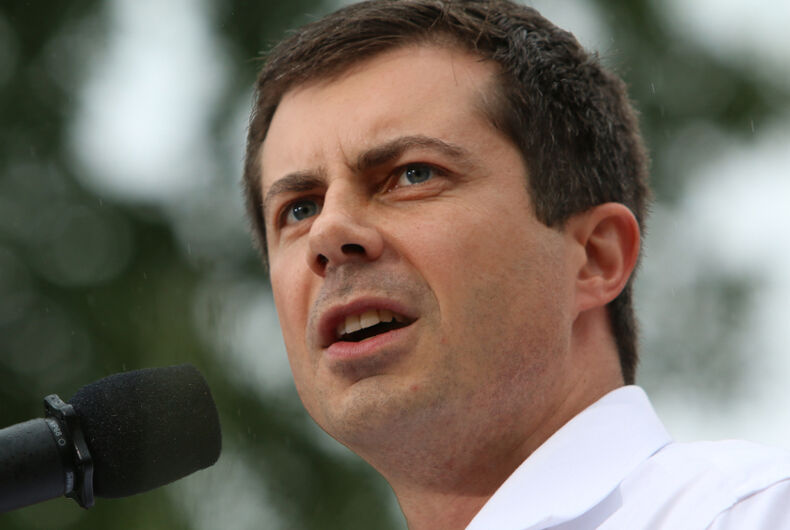 Related: Twitter blew up on Pete Buttigieg for criticizing Barack Obama… in a fake quote

The same poll showed that 65% of voters have a favorable impression of him, compared to 39% for Warren and 31% for Biden. Among the poll’s 255 participants who’ll vote in the February 11, 2020, New Hampshire primaries, approximately 23% believe he’d make the best president over Warren (17%) and Biden (14%).

However, while “Buttigieg is benefiting today from his strong positive image,” the New Hampshire Institute of Politics says, “he will likely have to convince voters that he has a good chance of beating Trump in order to consolidate his new support.”

A recent Iowa poll conducted by the Des Moines Register/CNN/Mediacom found that 25% of likely Democratic caucus-goers say that Buttigieg is their first choice for the Democratic nomination, a wide margin above Warren (16%), Biden (15%) and Sen. Bernie Sanders (I-VT) (15%).

Most recently, Buttigieg was criticized for using stock photo of Kenyan woman to promote his plan to address U.S. racism, blasted for a 2010 video in which he said he had a lot in common with Republican Tea Partiers, and pooh-poohed for a portrait he took at Berlin’s Holocaust Memorial.

When Buttigieg released “The Douglass Plan” in July 2019, “a comprehensive and intentional dismantling of racist structures and systems,” the plan included an image of a woman living in Kenya, Africa.

On top of everything else, the Buttigieg campaign used a stock photo from Kenya to promote its Frederick Douglass Plan for Black America https://t.co/OqnGSIqCLS pic.twitter.com/qBqei71TdA

The gaffe was notable considering Buttigieg’s  handling of a racialized police shooting in his hometown of South Bend, Indiana, and his low polling among black voters. Detractors called his use of an African woman’s image culturally tone-deaf. His campaign spokesperson blamed a contractor and called the use of stock photos “standard practice across many campaigns.”

As for the aforementioned 2010 video, it was taken during Buttigieg’s failed candidacy for Indiana state treasurer at a “Meet the Candidates Night” hosted by two Republican groups aligned with the right-wing populist Tea Party movement. The Tea Party is largely anti-Democrat, anti-LGBTQ, and anti-immigrant.

In his opening remarks, Buttigieg says he believes “the Tea Party is motivated by real concerns” namely “the failures of the old normal” and “that we have a lot in common.”

His campaign says his comments echoed similar ones made by then President Barack Obama, adding that Buttigieg never identified as a Tea Partier and that he only attended the event to appear onstage with his political opponent who had refused to publicly debate him.

Last, web commenters have blasted Pete for a recently unearthed April 2017 Instagram photo posted by his husband Chasten Buttigieg showing his husband walking through Berlin’s Memorial to the Murdered Jews of Europe, also known as the Berlin Holocaust Memorial which commemorates the three million Jews murdered during the Nazi Holocaust.

Chasten’s caption reads “This guy,” which is understood as an affectionate statement.

In the past few years, people have been urged not to take selfies at the Memorial out of respect for the victims and their surviving families. The Buttigieg campaign hasn’t responded to criticisms over the image.

The Daily Beast says as his star has risen, Buttigieg is expected to face “grilling” at tonight’s debate about his “comparative lack of experience, weak performance among key constituencies” and his “short political resume” as a mayor with no experience as a national political leader.