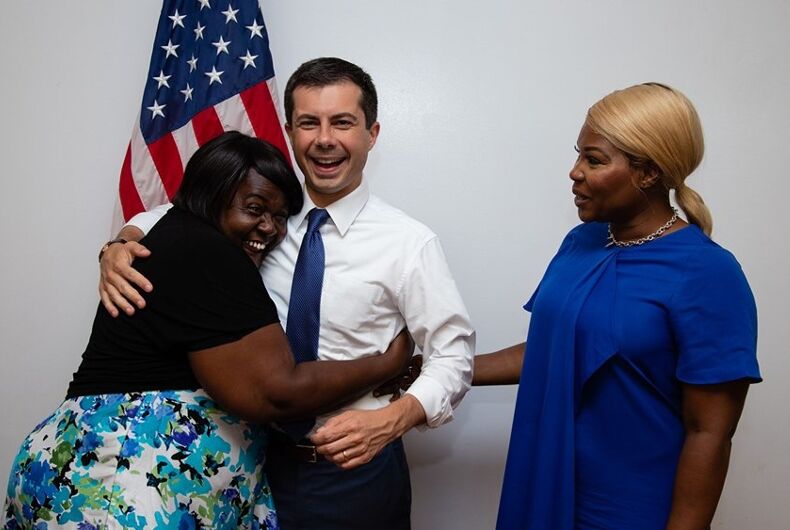 Perhaps the biggest obstacle to Pete Buttigieg’s presidential ambitions is his enduring lack of support among African-American voters, a key constituency of the Democratic party. In some polls, Buttigieg has been polling at zero percent among black voters. If Buttigieg can’t make inroads into that constituency, his road to the White House is going to stop well short of his destination.

But one focus group with 24 uncommitted African-American voters in South Carolina – a key primary state – suggest that Buttigieg’s lack of support has to do with one of his defining characteristics: he’s gay.

The focus groups were conducted this summer for Buttigieg’s campaign, according to The State, a newspaper in Columbia, SC, that obtained a summary of the results. The summary said that Buttigieg’s gayness wasn’t a “disqualifier” for the focus group participants, but it wasn’t exactly a selling point either. The summary dubbed it a “barrier.” Of the 24 voters in the group, only one was considering voting for Buttigieg.

“I’ll go ahead and say it,” said a male participant. “I don’t like the fact that he threw out there that he lives with his husband.” Another woman, under the age of 40, said that it was “too much information.”

During the three 90-minute sessions, the voters questioned how foreign leaders would respond to having a gay president.  “Are they going to relate to him with a husband?” one woman asked.

Another man said that Democrats need a strong leader to follow Trump “and that’s the only reason I think that would hurt” Buttigieg.

Buttigieg’s supporters say that he’s still largely unknown. “Once people meet him, they like him. It’s a thing of, ‘We don’t know who he is,’” Brandon Neal, who is leading Buttigieg’s African-American outreach, told the paper.

But Clay Middleton, a South Carolina Democratic National Committee member who is supporting Sen. Cory Booker (D-NJ), told the paper that he wasn’t surprised by the focus group results.

“I’ve been a black guy all my life in the South and it is one of those things. African-Americans, when it comes to certain things, are very conservative,” Middleton said. “If you needed a focus group to tell you that, ok.”

While backing a gay candidate may be a problem for some black voters, Buttigieg hasn’t helped his case either. His handling of a police shooting of a black man in South Bend last spring revealed rifts between the mayor and his black constituents.

Buttigieg also didn’t do himself any favors by planning to attend a fundraiser hosted by the Chicago city attorney who led a vigorous effort to block the release of a video depicting the shooting of Laquan McDonald, a black teenager whose death at the hands of police stirred months of protest and resulted in an officer’s conviction. (Buttigieg subsequently canceled.)

And then there’s the man who Buttigieg is angling to depose, former Vice President Joe Biden. Buttigieg is modeling himself as the perfect moderate alternative to the former vice president, but Biden enjoys tremendous support among African-American voters, in part because of his years of service with the nation’s first black president.

Of the 24 voters, only one was considering voting for Buttigieg. The rest were supporting Biden.

Buttigieg’s weakness with black voters remains his greatest vulnerability. His rise in the polls in Iowa is a positive sign for his campaign, but Iowa is a much whiter state than the usual Democratic strongholds. If Buttigieg is ever to make it past the early states, he’s going to have to find a way to solve his problem with black voters, and fast.

When ‘Queer Eye’ star Karamo Brown came out, it ended his relationship with his father