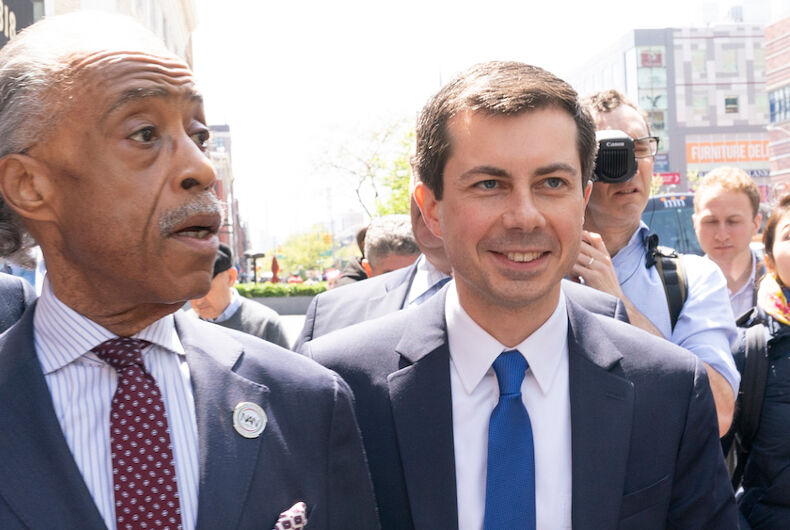 Though Pete Buttigieg has made a dramatic rise in the Democratic Presidential primary — hauling in $24.8 million in second quarter fundraising, making an impressive showing in the first TV debate and even beating Trump in a general election poll — he still has a sore spot on his mayoral record that could undermine his candidacy unless he pays serious attention to it: His handling of racialized police violence in his hometown of South Bend, Indiana.

We’re not just talking about Eric Logan, the 54-year-old black man who was shot by a South Bend police officer who had his body cam turned off. The officer claimed that Logan had a knife, but black residents are skeptical and Black Lives Matter protestors confronted Buttigieg during his recent visit back to South Bend.

Rather, local racial justice activists say that Buttigieg long ignored the racial disparities among the town’s largely white police force leading up to the shooting.

In a new column for The Independent, self-described “queer black man” Michael Arceneaux write, “The media darling is facing a crisis in his city that had been building for years – one very much of his own making.”

It does not help that Sound Bend’s police department reportedly paid out over $1.3m in brutality and civil rights settlements during the first five years Buttigieg served in office. His failure to heed activists’ and local officials’ calls for an actual citizen’s review board doesn’t help either.

Then there’s the fact that Buttigieg appointed two white police chiefs following Boykins’ tenure. Consider the miniscule minority representation in the South Bend police department and you’ll realize how significant this is — the department is reportedly only 5 per cent black and 5 per cent Latinx. Derek Dieter, a retired South Bend police officer and former City Council president, who is white, told the New York Times in April, “Over the years we have had probably 20 minority officers who left their jobs.”

Just this week, Dieter told CNN that Buttigieg took a “passive approach” with the police department and added: “Qualified minority officers leave, because there is no avenue of advancement or promotion.”

Arceneaux doesn’t think that Buttigieg is racist, just a bit clueless, naive and unwilling to examine how racism endangers the residents of his town, including the impacts of poverty and gentrification. He worries that if his candidacy fails, people will blame “black homophobia” rather than his “failure to make inroads with the black community.”

Related: Pete Buttigieg just got a presidential endorsement from a major LGBTQ org

However, perhaps Buttigieg is starting to get wise. When a man recently told Buttigieg that relations between the black community and police would improve if black people would just “stop committing crime and doing drugs,” Buttigieg responded, “The fact that a black person is four times as likely as a white person to be incarcerated for the exact same crime is evidence of systemic racism…. racism makes it harder for good police officers to do their job too. It is a smear on all law enforcement.”

Now let’s see if Buttigieg can follow that up with concrete action steps in the town he oversees.