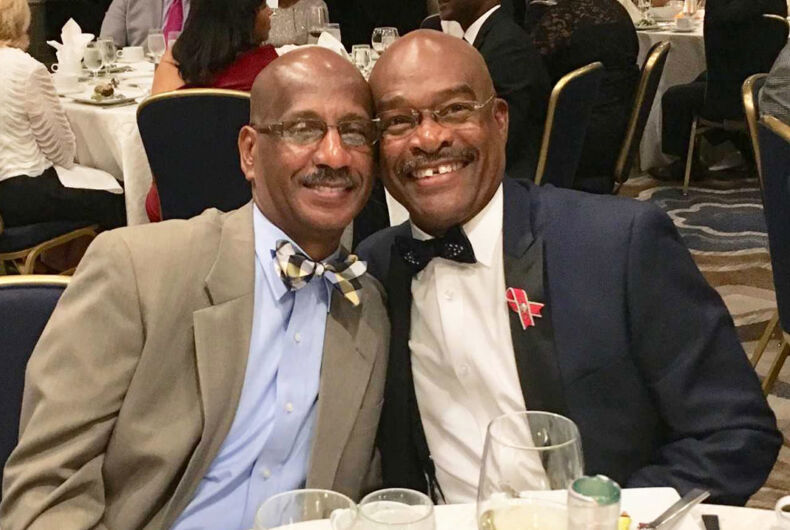 During the 1969 Stonewall uprising between New York City police and queer patrons tired of their harassment, both Paul Glass and Charles Evans were there on their own. Neither man realized it until they began dating and eventually married years afterwards.

According to Boston’s NPR station WBUR, Glass and Evans had briefly met and unsuccessfully tried dating long distance a year before the uprising began. Glass was a teenager and living in Boston at the time. He’d occasionally visit New York City to explore its more developed gay scene.

The night in question, Glass had come into town and was visiting the piers near Christopher Street when he began hearing people talking about the bar being raided. “Evans was coming from a club on the opposite end of Christopher Street,” WBUR writes.

“It just happened to be that Friday after leaving the club, I came down West 4th Street, and as I approached West 4th Street, I saw a crowd…. And next thing we knew, we were joining into the crowd. Now to others, it was kind of interesting because I was still in a riot mode, because the month before we had had a big riot at my college. And I guess by getting into this crowd, it just made the adrenaline even higher.”

Since police raids on gay bars happened rather often at that time, news of the raid didn’t frightened them, but they remember feeling encouraged by the large number of people buzzing about it.

“I didn’t feel so much in danger because I felt we had numbers, and it wasn’t the kind of commotion, if you will, from the police. They were being resistant or pushing back, but they really weren’t being as violent as I have seen them in other situations. I think they were more afraid of the crowd than the crowd was afraid of them. And they really were moving in reverse when they were being pelted with things that were being thrown at them. So I felt that there was some safety from that perspective.”

When the two men reconnected in 2012, they hadn’t spoken in 12 years. A mutual friend put them back in contact and immediately they felt a spark. Two years later, they married. They’ve now been married seven years.

Related: Stonewall sparked much more than the gay rights movement & you probably had no idea

Speaking of the importance of being at the uprising and what it meant to him then and now, Evans said:

“Being black and born in the South, this was just another time of fighting resistance. So it was just an uprising that I felt that was part of my nature to fight for my rights…. And that’s why I think it’s so important for us older LGBTQ to try to communicate to these kids and let them understand the importance of it, because sometimes I think they just live for today.”

So what exactly is Mayor Pete’s road to winning the Democratic nomination?