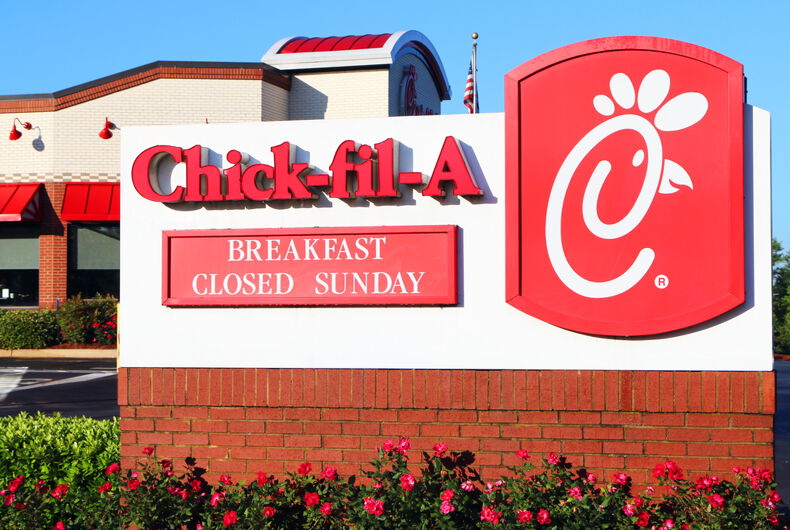 Fast food chain Chick-fil-A has anguished conservatives after announcing they will no longer give to organizations that oppose LGBTQ rights. No group has taken the decision harder than the anti-LGBTQ hate group Family Research Council (FRC).

“To a lot of Americans, the company’s decision to walk away from years of biblical truth is upsetting,” FRC President Tony Perkins wrote in a message sent to supporters and posted on the group’s website. “To us, it’s personal.”

In 2012, blowback to the founder’s vocal opposition to same-sex marriage (and the subsequent revelation that the privately owned chain was donating large amounts of money to groups that actively campaigned against LGBTQ rights) had reached fever pitch.

Christian conservative groups like FRC had turned the boycott by supporters of LGBTQ rights into a crusade to “save Chick-fil-A.” Former Arkansas Governor Mike Huckabee organized a “Chick-fil-A Appreciation Day” that drew thousands of customers ginned up by the religious right.

In August, Floyd Corkins, a mentally disturbed gay man, walked into FRC headquarters in Washington, D.C., intent on killing the staff after seeing a photo of them posing behind a bunch of the chain’s chicken sandwiches. A security guard stopped Corkins before the domestic terrorist attack could claim any victims.

While LGBTQ groups decried Corkins’ actions, Perkins is pointing out that the chicken chain didn’t respond publicly to the attack – or privately.

“In the days and years after that, we never talked publicly about Chick-fil-A’s response to the shooting. Mainly because there wasn’t one,” he wrote. “Through all of the press conferences, the trial, and sentencing, I never once picked up the phone or opened my email to a message from someone at headquarters. Not even to ask about Leo.”

“Obviously, Chick-fil-A wanted then what they want publicly now: as much distance from our movement as possible.”

“That was tough, but we stayed quiet – hoping that if groups like FRC stood beside them, the company Christians had come to love would have the courage to keep living out their values in the public square,” Perkins continued. “And for seven years, they seemed to. Even when the mob turned up the heat, blocking them from airports, cities, and college campuses, Chick-fil-A rode a wave of conservative support to its highest profits ever.”

Perkins cited the religious right’s efforts in support of the chain, from a Texas law called the “Save Chick-fil-A Law,” to a promise from Transportation Secretary Elaine Chou to investigate decisions by a handful of airports to exclude the chain as an option in food courts.

“Millions of families drove out of their way to stop at Chick-fil-A – not because the chicken was that good, but because their conviction was,” Perkins wrote in a slap at the company’s sandwiches that the group had previously touted as the best in the business.

“Every believer in today’s culture understands the price of standing for truth. Some people more than others.”

Editor’s Note: This article has been corrected to reflect that Mike Huckabee was the governor of Arkansas and not Alabama.

On the Transgender Day of Remembrance, take a moment to reflect on those we lost

Buttigieg in first place in New Hampshire poll, making him the target in tonight’s debate