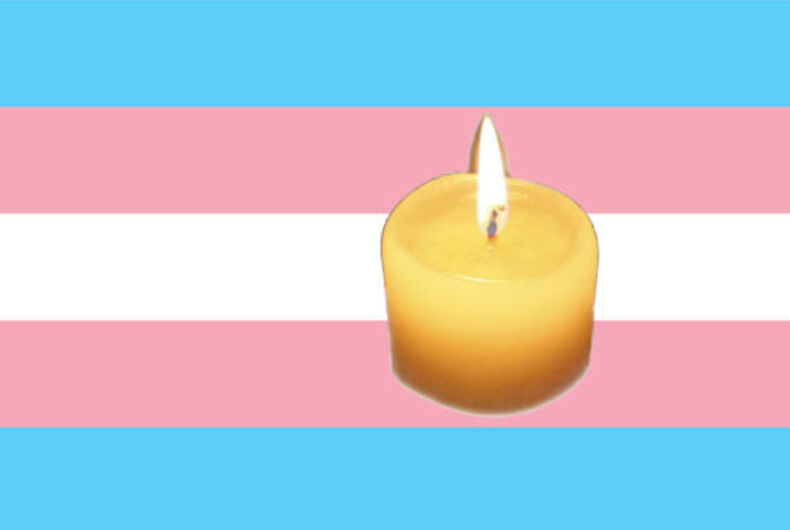 In the lead-up to the Transgender Day of Remembrance (TDOR) today, the organization Transrespect versus Transphobia Worldwide (TvT) released a report showing that 331 trans and “gender diverse” people have been murdered globally in 2019 alone — a sobering reminder of the violence that trans people experience internationally just for living as their authentic selves.

What’s worse: By analyzing data from 2008 to 2019, TvT found that 3,314 trans and gender diverse people had been murdered in 74 countries worldwide over the last 11 years.

The 2019 report, which reflects data collected from October 2018 to September 2019, shows the U.S. ranking third with 30 murders. Mexico ranked second with 63 murders and Brazil ranked first with 130.

TvT calls “stigma and discrimination against trans and gender-diverse people… part of a structural and ongoing circle of oppression that keeps us deprived of our basic rights.”

They add that this violence “frequently overlaps with other axes of oppression prevalent in society, such as racism, sexism, misogyny, xenophobia, and anti-sex worker sentiment and discrimination.” By their count,  85% of U.S. victims were Native American or trans women of color. Worldwide, 61% of victims were sex workers — a majority were killed by firearms.

GLAAD’s memoriam for trans people murdered in the U.S. in 2019 shows that most victims were young, black trans women. A recently released Human Rights Campaign (HRC) report shows that 91% of victims in 2019 were black, 81% were under the age of 30, and 68% lived in the South.

The HRC adds, “Some victims’ deaths may go unreported, while others may not be identified as transgender or gender non-conforming in the media, often because authorities, journalists and/or family members refuse to acknowledge their gender correctly.”

CNN backs up this sentiment:

The federal government collects crime data primarily through a system based on voluntary reporting from state and local law enforcement agencies. Agencies aren’t required to report crime data to the FBI, and no US jurisdiction or agency routinely collects information about a person’s gender identity when they die.

The HRC says we can dramatically reduce this violence by educating community members about trans and non-binary lives, lifting up their voices, advocating for inclusive laws and educational policies, and expanding economic opportunities through work training, aid for the homeless and decriminalizing sex work.