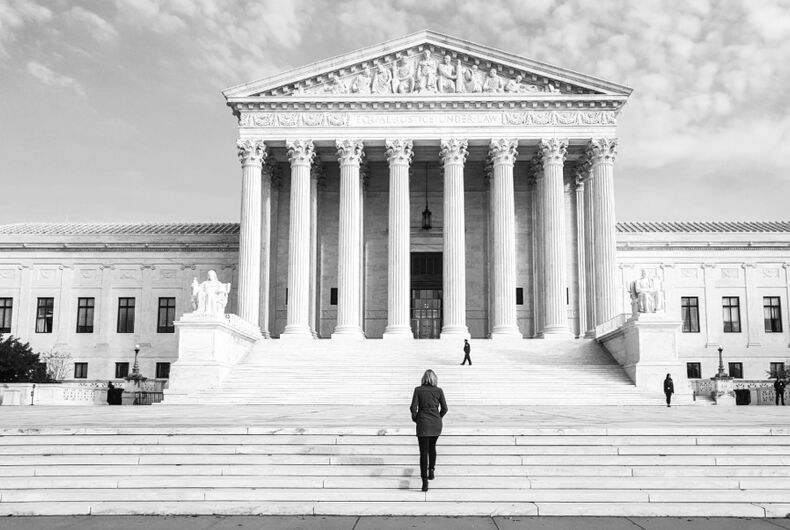 With the U.S. Supreme Court now deliberating Aimee Stephens’ employment discrimination case, there is near unanimous agreement that the stakes are high for trans people.

There is likely less unanimity as to the question of whether this is truly the first trans Supreme Court case.

Gavin Grimm’s case?  Well, the court initially agreed to hear it, but then begged off.

A generation earlier? J’Noel Gardiner’s case involved the recognition of her heterosexual marriage, but in broader legal terms it raised issues of comity between the states (Kansas said her validly acquired Wisconsin birth certificate was meaningless in Kansas), stuff constitutional lawyers love to chew on.  In Christie Lee Littleton’s case, Texas rejected one of its own birth certificates – but it also rejected a Kentucky marriage that had been presumed to be legal.

In 1994, trans woman Dee Farmer had a case heard by the full court.  However, the issue was the Eighth Amendment (“cruel and unusual punishment”) and not trans matters per se.

A decade earlier the Supreme Court refused to hear Suzanne Daly’s challenge to Nevada’s termination of her parental rights (not merely a denial of custody, but a declaration that insofar as her daughter was concerned, Suzanne no longer existed) because of, well…, you know.  According to Nevada Supreme Court Justice Thomas L. Steffen, it was Suzanne’s “choice to discard [her] fatherhood and assume the role of a female who could never be either mother or sister to [her] daughter.”

A few months prior, the Supreme Court could have weighed in on one of the same issues in play in Aimee Stephens’ case (only one; Price Waterhouse v. Hopkins hadn’t happened yet).  The Seventh Circuit Court of Appeals decision against Karen Ulane was so ugly that that even most trans non-lawyers quickly learn of it.

“Ulane is entitled to any personal belief about her sexual identity she desires,” Judge Harlington Wood wrote. “But even if one believes that a woman can be so easily created from what remains of a man, that does not decide this case.”

It doesn’t take much imagination to see some of the current Supreme Court justices adopting that precise phraseology next spring.  Still, in 1985 the court passed on the Title VII trans question.

That didn’t help Karen Ulane, of course, but it kept Wood’s musings from being hardwired into Title VII (even though a quarter-century of federal judges pretended they were.)  Ditto for the 1976 rejection of New Jersey teacher Paula Grossman’s attempt to get the Supreme Court to hear her employment discrimination case.

And even before that, at least one trans case knocked at the Supreme Court’s door.

Good luck finding out about it though traditional means, though.

Trans folks who grew up in Texas in the 1970s likely remember Anne Mayes, who managed to transition in spite of being continually hounded by Houston police.  The city’s anti-crossdressing ordinance was their frequent weapon of choice.  Mayes unsuccessfully fought back in court.  The citation 416 U.S. 909 will lead to Mayes v. Texas and its terse outcome: “Certiorari denied.”  One 1974 New York court opinion mentions the cert petition and there was some amount of contemporary gay and mainstream press coverage, but those who come across the cert denial via LEXIS or Westlaw receive no indication of what the case was about.

Until the early 1980s, the Texas court system had an odd jurisdictional quirk. Civil cases could be appealed to a Court of Appeals and then to the Texas Supreme Court. The Texas Court of Criminal Appeals, however, was the only appeal avenue for criminal cases.  And not all qualified even for that.  Punishment had to be at least a fine greater than $100.

Lawrence v. Texas eventually got to the U.S. Supreme Court from one of Harris County Criminal Courts at Law but only after five years, two rounds at Houston’s intermediate appellate court and a petition denial by the Court of Criminal Appeals.  But when Anne Mayes appealed in 1973 after being convicted and fined only $50, there was only one place to go: the U.S. Supreme Court.

In their petition on her behalf, ACLU attorneys Melvin Wulf and Marilyn Haft (the latter soon to co-author the first edition of The Rights of Gay People) implored that the case “involves important questions of federal constitutional law which have not been but ought to be decided by this Court.”

Most of the court was not convinced. But there was one final notation: “Mr. Justice Douglas would grant certiorari.”

It takes four justices to grant cert and votes on taking cases are rarely officially disclosed.  So, there may have been some – just not four – justices who wanted to undo Ulane v. Eastern Airlines in 1985 or all nine may have been fine and dandy with it.  But in 1974, the last remaining liberal lion of the New Deal era appears to have sided with Anne Mayes.

Now we need to hope that at least five 21st century justices find a way to side with Aimee Stephens.