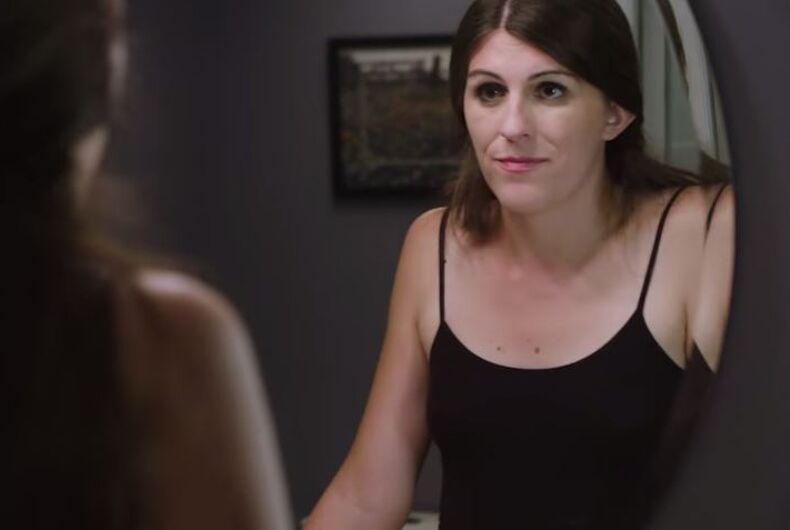 Danica Roem in a new ad hitting back at her opponent's disrespect.Photo: YouTube

One of Virginia’s northernmost district seats is held by Danica Roem, a transgender woman ex-journalist and ex-metal band member. While she remains successful in an area – and state – that is leaning more Democrat as of late, the election for her seat this Tuesday is still contentious.

Roem is the incumbent facing reelection against Kelly McGinn, an anti-abortion, anti-LGBTQ ex-lawyer, political staffer, and mother of 4, in Virginia’s 13th House district (consisting of Manassas Park and parts of Prince William County).

Related: Amy Klobuchar tried to give an anti-LGBTQ Pentecostal group $500,000 in taxpayer funds

McGinn’s homophobic history is vast, but she’s done well in keeping quiet on the subject throughout her campaign. She has, however, been proven as a liar already after she made debunked claims that Roem was trying to pass laws that made abortion legal up to the moment of birth – Roem was not even eligible to vote on the bill in question when it died in the Assembly.

Other organizations, such as the the Family Foundation Action, Westboro Baptist Church, and Prince William County GOP, have resorted to nothing other than transphobia for ads and social media posts in the last stretch of the campaign.

I voted to expand Medicaid, raise teacher pay and pass the largest transportation funding bill in six years.So what do…

Two years ago, Roem was the newcomer challenging Republican incumbent Bob Marshall – who as the district’s longest serving delegate, had an atrocious anti-LGBTQ record. Roem earned a very easy victory. Outside of Marshall’s 26 year term, the 13th district seat has flipped between Democrat and Republican several times, and no one else has served more than four full terms.

In addition to that, the district has considerably shrunk since 2001 and will be redrawn by 2021 – by state delegates up for election now.

All of these factors are proving to make both major parties seriously concerned about this seat. Democrats view Roem’s chair essential if they are going to regain, or come close to having, the majority in the state House of Delegates. Republicans still believe they have a stronghold over the state, and conservatives (as well as homophobia) has made a resurgence alongside McGinn as well.

I voted to expand Medicaid, raise teacher pay and pass the largest transportation funding bill in six years.So what do…

But Roem is no longer just a newcomer for pro-LGBTQ people to get behind. She has fulfilled several promises she made on the campaign trail, such as bringing improved public transportation to the area and improving traffic conditions. Roem also touts that in her one term, she’s passed twice the bills her predecessor did in 13 terms. She boasted to the Washington Blade that she has delivered on her goals of Medicaid expansion and raising teacher salaries.

While Roem is very much focused on improving life for her constituents, she is still actively aware of how important her identity is for younger LGBTQ individuals. On the campaign trail, Roem has separated herself from McGinn and conservatives by restraining from using negative tactics to attack her opponents. Instead, she has taken the high road approach, showing respect for them in campaign ads and social media mentions. “No elected official should ever single out and stigmatize the very people they were elected to serve in the first place,” EMILY’s List quoted the delegate after their recent endorsement of her.

Roem also secured another Joe Biden endorsement, as she did in 2017.

In a recent HuffPost article, Roem’s quoted as saying “I feel like I’m in a much better place than at this point in 2017.”

Yet, as pointed out in the Blade, several LGBTQ organizations are conflicted on moving forward on pushing forward equality in the state. The Human Rights Campaign has seriously covered the homophobia and transphobia in the state and is reported to have dropped a six-figure budget on help out Virginia Democrats. Still, some political analysts and activists believe that anti-discrimination and equal rights bill could pass the house without a blue majority.

“We knew at this point in 2017 that our ground game was dominant and our ad campaign was dominant,” Roem recalls. “It was just the anxiety of beating a 26-year incumbent. This time around we didn’t leave anything to chance.”

Wednesday, we’ll find out if leaving nothing to chance will pay off for Roem and all the transgender politician she inspires around the world.