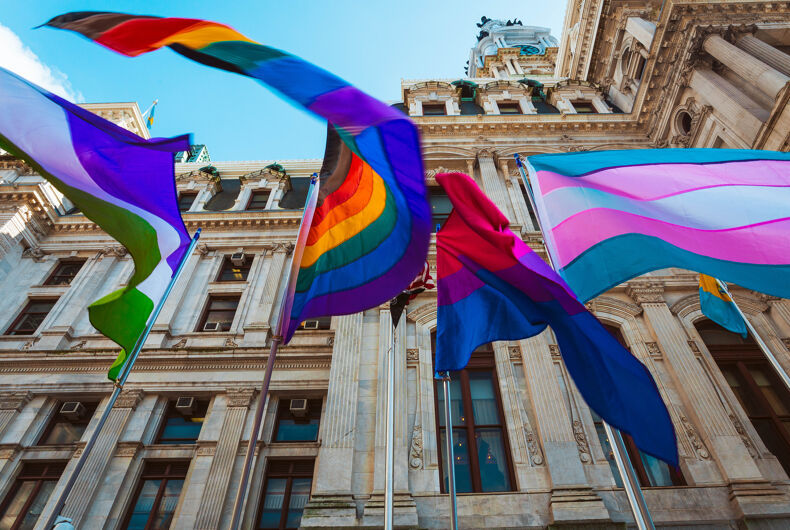 LGBTQIA flags fly outside of City Hall in Philadelphia.Photo: Kalen Martin-Gross (via Shutterstock)

Mayor Jim Kenney of Philadelphia signed three bills into law that will create citywide rules for public institutions regarding the safety of, and accommodations for, transgender and non-binary people.

Signed on Thursday, the new laws require that youth organizations implement a policy that protects transgender or gender non-binary children from bullying and discrimination. City properties are also now required to provide a gender-neutral bathroom in all of their facilities.

This means that Philadelphia’s buildings, including city hall “will have at least one gender-neutral bathroom,” while “youth organizations like schools, sports clubs and recreation centers will implement nondiscriminatory practices for the LGBTQ community.”

According to the Philadelphia website, “Philadelphia is one of the country’s most LGBT-friendly cities with a long history of tolerance.”

ACLU’s Trans Justice Program advocate coordinator Naiymah Sanchez, a native Philadelphian, was one of the most recognized champions for the law, and spoke highly of them. “I’m ecstatic, being a Philadelphian, being someone who went to school here and was a trans teen here.”

The laws are expected to go into effect starting in the New Year. Mayor Kenney said to KYW Radio, “The bills are a testament to the city’s continued commitment to centering the experience and safety of transgender, and gender non-conforming people.”

As government officials, we must advocate for our marginalized communities. These progressive bills protect the rights of our LGBTQ+ community by ensuring that City services are accessible to people of all genders and sexual identities. pic.twitter.com/uGaR6pur98

Trump has turned U.S. diplomacy over to the religious right