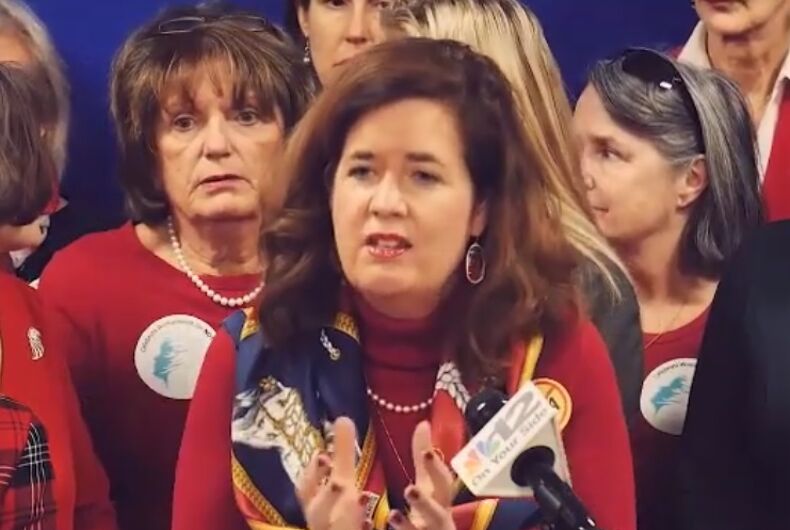 The Republican running against out lawmaker Danica Roem has come under fire for her anti-LGBTQ activism that included arguing that marriage equality is a “morally repugnant practice” comparable to slavery.

Kelly McGinn (R) is running for Virginia’s 13th District seat in the state’s House of Delegates against Danica Roem, the first transgender person elected to a state legislature after winning her election in 2017.

McGinn has been a lawyer, a Congressional staffer for far-right senator Sam Brownback (R-KS), and a movement conservative activist. As part of her activism, she signed a letter calling for conservative Catholics to be less “civil” when it came to their anti-choice and anti-LGBTQ views.

“If Catholic politicians advocated segregation or — even worse — slavery, would there be a call for civility towards them?” the letter states.

The letter discusses slavery and slave trade extensively, concluding that “unless and until the Culture of Death is as much a part of history as the slave trade,” then civil debate is not possible.

The “Culture of Death” is defined as “abortion, embryo-destructive research, and homosexual marriage.”

“They stand against the teachings of the Church and in favor of morally repugnant practices that are counter to the common good and that should be unwelcome in a just or even polite society,” the letter says.

“And we support bishops who move strongly to eliminate their grave public scandal.”

In 2011, McGinn provided testimony on a proposed law that would have banned discrimination based on sexual orientation and other categories when it comes to adoption.

“Children who are placed for adoption are uniquely in need of the most secure and loving parents that are available because they will already have endured the loss of their birth parents,” she wrote.

How do we know if parents are “secure and loving”? Well, they definitely have to be straight, according to McGinn.

“Similarly, although redefining family, marriage, and parenthood has become a national obsession, one man and one woman joined in marriage remain the most successful paradigmatic family in which to place a child,” she wrote.

The Advocate also found a press conference from earlier this year where McGinn led a group of women in opposing the Equal Rights Amendment (ERA), a constitutional amendment to ban discrimination on the basis of sex at the federal level.

Her objection? It might accidentally ban discrimination against transgender people.

It “does not even mention the word ‘woman’ or ‘women,’ referring only to equality of rights on account of ‘sex,’ a term which enjoyed a common understanding in 1972 — a man or a woman — but does not in 2019,” McGinn said, as the group of white women with anti-ERA pins around her burst out laughing.

He told guards another inmate threatened to rape him. So they put them in the same cell.