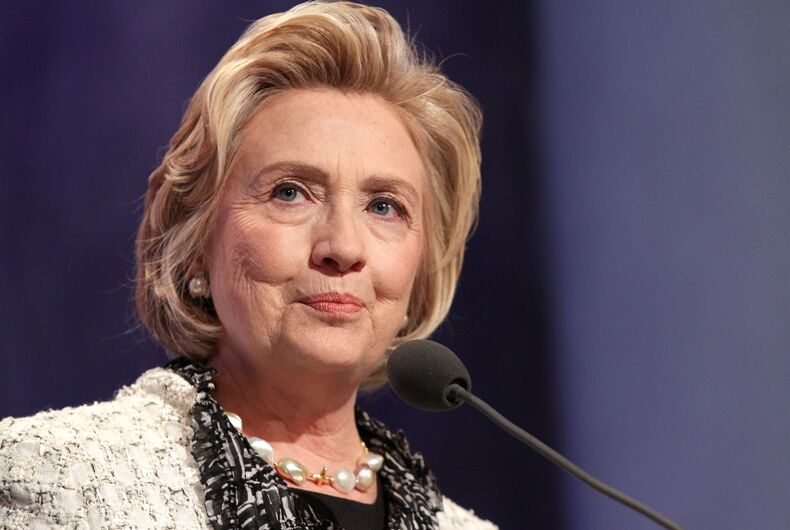 Former Secretary of State Hillary Clinton published a defense of transgender equality on the last day of Transgender Awareness Week after facing criticism for comments she has made about transgender people in the past few weeks.

Writing on Facebook under a banner that said “Trans rights are human rights” – a nod to her legendary speech in 1995 in front of the United Nations entitled “Women’s Rights are Human Rights” – Clinton wrote that transgender people are “a community that has overcome some of the fiercest and most violent opposition imaginable.”

Speaking with the Sunday Times this past October, Clinton said that accepting transgender people is “a very big generational discussion” and that “you’ve got to be sensitive to how difficult this is,” referring to cis women who refuse to accept that trans women are women.

Last week, she was talking to the BBC about the new book that she wrote with her daughter Chelsea Clinton, The Book of Gutsy Women, and she said, “I do think there is a legitimate concern about women’s lived experience and the importance of recognizing that,” a concern that she implied contradicted transgender equality.

“Let me be clear: transgender people deserve nothing short of full equality,” she wrote. “As Secretary of State, I was proud to change policy so that transgender Americans could carry passports that reflect their true gender. As a candidate for president, I sought out the input of the transgender community, and put forward a platform for trans equality. I’m glad to see the Democratic presidential candidates putting forward platforms of their own.”

“In a time when we’re living through a crisis of violence toward transgender women of color that’s getting worse instead of better, cruel decrees from the White House about transgender Americans who serve our country, and an era when bullying and discrimination are being elevated like never before, it’s clear that we have urgent work to do,” she wrote. “This is a moment for every single one of us to affirm that transgender people deserve equality, safety, and opportunity.”

“Millions of people see you, and stand by you.”

I’ve spent the last several weeks on the road with my daughter, Chelsea, talking about the book we wrote together—a book…

In both of the interviews where she made problematic statements about trans women, the Clintons were talking to U.K. journalists who wanted to focus on the profile of Roem and her inclusion in a book about women.

Chelsea Clinton was quick in both interviews to praise Roem: “I find her so inspiring and gutsy,” she told the BBC.

On the Transgender Day of Remembrance, take a moment to reflect on those we lost