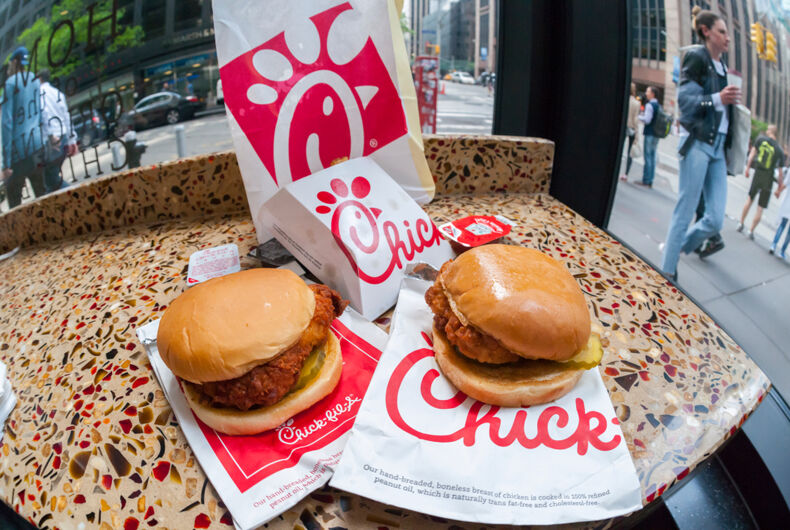 Advocacy organizations are reminding people that Chick-fil-A isn’t quite LGBTQ-friendly yet, even if they have stopped donating to anti-LGBTQ organizations.

Yesterday, Chick-fil-A announced that they were implementing a new policy when it comes to donating to charity, following media attention earlier this year on their donations to the Salvation Army, the Fellowship of Christian Athletes, and the Paul Anderson Youth Home in Atlanta.

Related: McDonald’s is throwing shade at Chick-fil-A for being anti-gay

But the Human Rights Campaign (HRC) is now saying that that’s not the only problem with the fast food restaurant’s record on LGBTQ issues.

“While this is an important step for Chick-fil-A, the company still does not have workplace protections and policies that are fully inclusive of LGBTQ people,” Beck Bailey of the HRC Foundation told The Advocate. “We look forward to the day when Chick-fil-A’s commitment to welcoming all is reflected in their workplace policies and practices by including explicit sexual orientation and gender identity nondiscrimination protections.”

The company’s non-discrimination statement on its corporate website includes race, sex, age, and around a dozen other categories, but not sexual orientation and gender identity.

The statement says they don’t discrimination based on “any other status, classification or factor, protected by federal, state, or local law,” but LGBTQ people are not included in federal anti-discrimination legislation nor in most states’ civil rights laws.

Chick-fil-A does not participate in HRC’s Corporate Equality Index (CEI), an annual report that evaluates businesses’ practices, so many of its workplace policies remain un-evaluated.

“If Chick-Fil-A is serious about their pledge to stop holding hands with divisive anti-LGBTQ activists, then further transparency is needed regarding their deep ties to organizations like Focus on the Family, which exist purely to harm LGBTQ people and families,” GLAAD’s Drew Anderson said in a statement.

GLAAD also said that Chick-fil-A “should unequivocally speak out against the anti-LGBTQ reputation that their brand represents,” referring to how conservatives have turned the restaurant chain into a symbol of their loyalty to their opposition to LGBTQ equality.

“Chick-Fil-A investors, employees, and customers can greet today’s announcement with cautious optimism, but should remember that similar press statements were previously proven to be empty.”

Yesterday’s announcement from Chick-fil-A referred to a policy for future donations, and it warned people that news that the company donated to the Salvation Army and the Fellowship of Christian Athletes in 2018 (the reports earlier this year were about donations made in 2017) is still to come.

This lesbian proposal on Ellen’s show will make your day

Kathleen Turner played a trans character on “Friends,” but she says she wouldn’t do it now