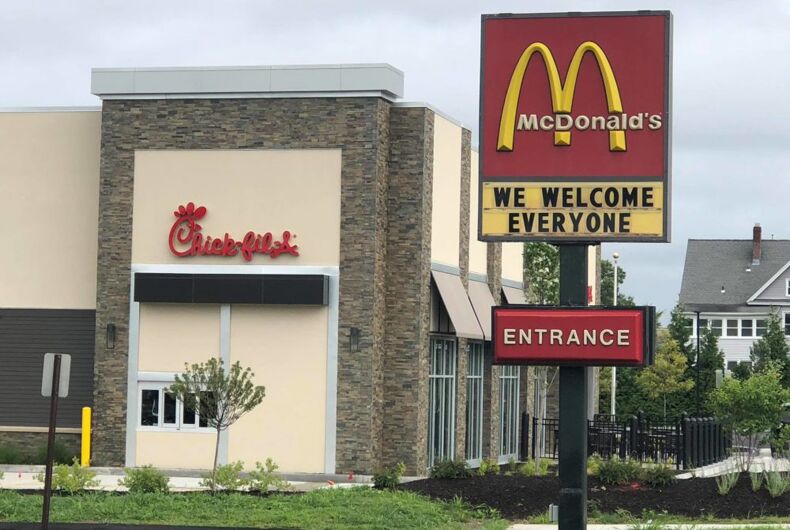 A Connecticut McDonalds is throwing shade at their newest neighbor, Chick-fil-A, over their anti-LGBTQ stances.Photo: Facebook/Mark Dobbins

A Glastonbury, Connecticut, McDonalds is throwing shade at their soon-to-open competitor, Chick-fil-A, with a sign that subtly highlights the chicken chain’s notorious anti-LGBTQ history.

“We welcome everyone,” the sign says. While the other side advertises Quarter Pounders, passersby see the welcoming statement when facing the unopened Chick-fil-A, providing a visual juxtaposition.

Jordan Snook, the Chick-Fil-A franchise owner, says he isn’t sure what the sign refers to specifically, but touts his intention to create “an environment of hospitality.”

“We are excited to open in Glastonbury next week, and look forward to being great neighbors who welcome everyone,” he said.

The McDonalds general manager insisted the sign wasn’t meant as a poke at the competition, albeit with a sly smile.

“It just means that everyone is welcome, young old, everyone,” she said.

“For McDonald’s to step up and say we welcome everyone. I feel that is a huge step for them. Then in the background you have Chick-fil-A who has historically not welcomed everyone,” customer Tina Manus told the local NBC affiliate. She says she went to McDonalds to show support for the sign and its message.

Chick-fil-A came under fire a few years ago for supporting anti-LGBTQ groups and public comments from the chain’s founder that were considered antigay. The chain continues to donate to causes that harm the LGBTQ community despite denying they do so.

LGBTQ people went on strike in Israel & shut the country down