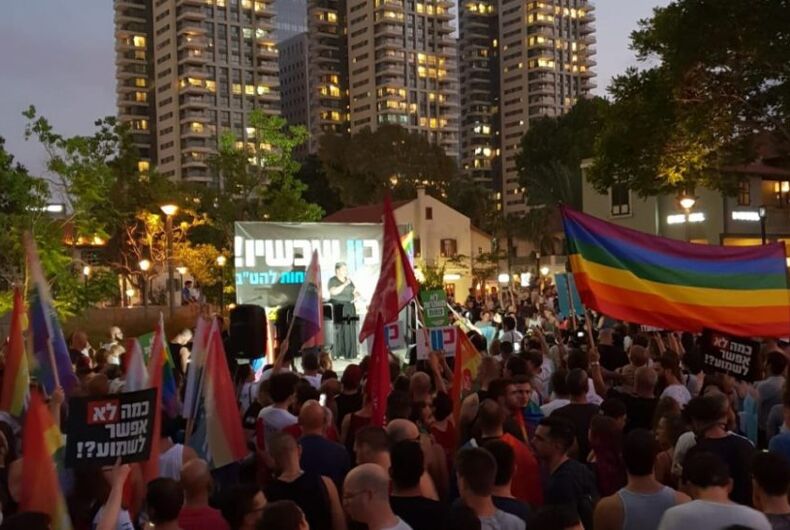 Tens of thousands of people went on strike throughout Israel yesterday to protest for surrogacy rights for gay couples.

The main protest was in Tel Aviv, where marchers blocked the Ayalon freeway for a short period and tens of thousands protested throughout the city.

Shouting “Netanyahu is homophobic, so we have taken to the streets,” the protest culminated in Tel Aviv’s Rabin Square. Estimates range between 60,000 to 100,000 people gathered in the square.

Sunday is a work day in Israel, and dozens of companies gave their workers a day off to protest, and several corporations, including Facebook and IBM, issued statements supporting the protests.

At issue is a new law about surrogacy. Last week, the Knesset, Israel’s legislature, voted in favor of a bill that would open surrogacy up to single women and married women who cannot have children.

Single men, though, were not included in the bill and would still be banned from hiring a surrogate mother. Since marriage equality is not legal in Israel, this is effectively a ban on gay couples becoming parents through surrogacy.

Last week, Netanyahu said that he supported an amendment to the law to extend surrogacy rights to single men, but he withdrew support, reportedly due to pressure from ultra-Orthodox members of his coalition.

The LGBTQ group Agudah called for a national strike.

“On that day workers from the community, and likewise our supporters and partners, will not be present at work and will close their businesses to protest the blatant discrimination against the LGBT community and the deterioration that has begun recently due to the government’s efforts to roll back our campaign,” the organization said in a statement.

At the rally in Tel Aviv, Agudah’s chair Chen Arieli said that the protest should just be a beginning.

“We must take all our emotions, all our disagreements, all the criticism, all the despair, and turn it into a powerful civic force which is no longer willing to hear ‘No’ as an answer!” she said. “It may take 20 years – but even the children of the homophobic parliament members will eventually live in a world in which they are surrounded by LGBT people. We’re here to say – we’re not going anywhere, and we are going to change this reality once and for all. Today, we say ‘Yes’ to a country which we’d like to see, and in which we’d like to live in.”

But a later statement from the military said that soldiers would not face punishment.

Microsoft’s Israel branch said that it would provide NIS 60,000 ($16,500) to any employee who wants to become a parent through surrogacy.

“The current text of the surrogacy law excludes the LGBT community and denies them the basic human right to establish a family,” the company wrote. “Starting today, every one of our workers who decides to set up a family using surrogacy will receive NIS 60,000 irrespective of gender, ethnicity, sexual orientation, age, or marital status. Everyone!”

If gay employees want to access this financial aid, they will have to find a surrogate outside of the country.

McDonalds is throwing shade at Chick-fil-A for being antigay