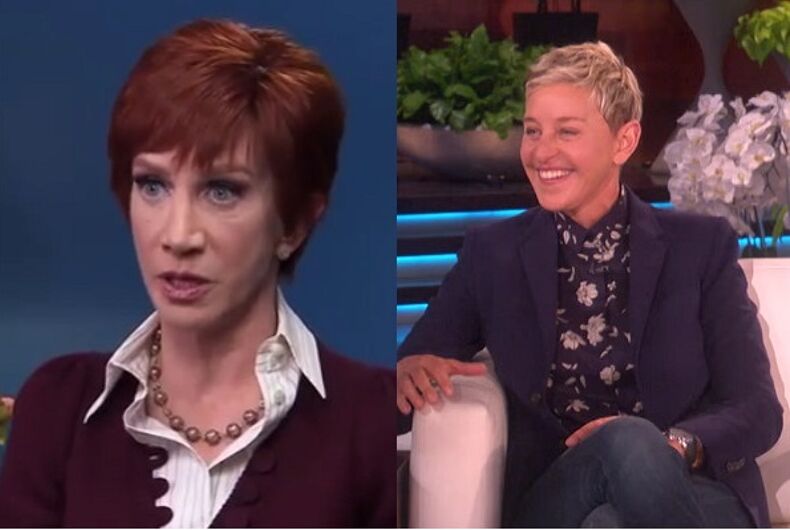 Comedian Kathy Griffin has upped the ante in her feud with Ellen, telling a story about a fight she had with the daytime talkshow host over Joan Rivers.

At a recent show in Los Angeles, Griffin talked about the last time she saw Rivers before she died in 2014. She said that Ellen “shunned” Rivers, and that Rivers was hurt by that.

“One of the things that really hurt Joan, and we talked about it at our last meal together, was that Ellen always shunned her and Ellen thought she was vulgar and not funny,” Griffin said.

When Rivers died, Griffin called Ellen to get her to appear at a tribute for Rivers.

“I just called her and I just said, ‘Look, woman to woman, comic to comic, I think you need to let go of your hatred for Joan Rivers. She’s passed away, just do a fucking tribute, be cool,'” Griffin told the audience in LA.

Well, Ellen wasn’t going to be shamed into performing at a tribute for someone she didn’t like. According to Griffin, Ellen said, “There’s a difference between mean and funny.”

“That fucking set me off,” Griffin said. “So we had a fight in which I used inflammatory words like, ‘Look you fucking untalented hack.’”

“You know when you’re fighting with someone and you can kind of laugh at a point? Yeah, not that day.”

Several days later, Griffin said that she tried to reach out to Ellen again, this time to do a sketch with her that involved them fighting.

“I think we should do a scene in the pool, I think there should be big hats [and] that bitch didn’t even respond! But that was a good idea!”

This isn’t the first time Griffin has complained about how Ellen doesn’t like her. In 2016, Griffin included a blind item in her book about a “daytime talk show host” with “short blonde hair.” Griffin said that this person had a “mean streak that all of Hollywood knows about.”

Griffin later confirmed that the story was about Ellen in an interview with Access Hollywood. Ellen called Griffin and went “on a rant” that left Griffin in tears.

“After the phone call I literally started sobbing,” Griffin said. “At the end of the day, whether we like each other or not, I’m always going to support a woman, over fifty, in the game, and making a great living.”

In summary, Griffin tried to get Ellen to perform at a tribute for someone Ellen didn’t like (great tribute to Joan Rivers!). When Ellen refused, Griffin yelled at her, and then several days later Griffin was surprised that Ellen wouldn’t do a sketch with her.

Two years later, Griffin told the gossip press that Ellen is actually really mean in real life (the sort of rumor that can kill the careers of older women in show business). When Ellen got mad, it was an example of how Ellen doesn’t support women over fifty.

McDonalds is throwing shade at Chick-fil-A for being antigay