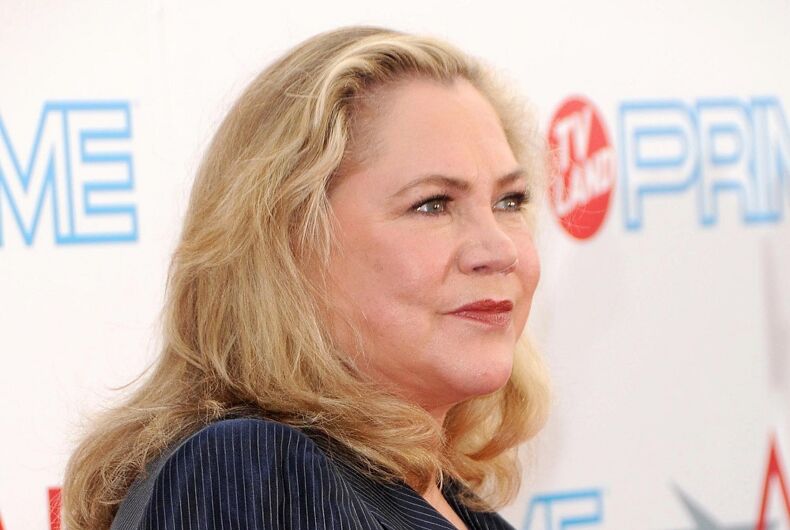 On Watch What Happens Live with Andy Cohen, 65-year-old actress Kathleen Turner told Cohen that she’d never reprise her role as Chandler Bing’s father from the 90s sitcom Friends, partly because there are now more transgender actresses who could capably play the trans character. This comes amid rumors of an upcoming Friends reunion for the streaming platform HBO Max.

You may recall that Chandler’s father, who was originally portrayed as a gay cis man who was having an affair with the pool boy, was later revealed to be a transgender woman and Las Vegas performer named Helena Handbasket. Handbasket was subject to various transphobic jokes in the series that haven’t “aged well,” Turner has said.

Related: How Matthew Perry killed a gay story for his character in ‘Friends’

On Cohen’s show, a caller asked Turner, “How much did [you] love playing Chandler’s father on Friends?”

Cohen remarked, “That was really groundbreaking!

Turner responded, “Well, yes – and of course, I wouldn’t do it now because there would be real people able to do it.”

While Turner didn’t elaborate on why she’d never play the character again, she revealed how she came to play the role:

One of the co-creators of Friends – I was doing a one-woman show based on Tallulah Bankhead – and he came up to see the show in San Francisco and came backstage and said, “You have to play Chandler’s dad.”

How they approached with me with it, was, “Would you like to be the first woman playing a man playing a woman?” I said yes, because there weren’t many drag/trans people on television at the time.

A product of its time, Friends unevenly treated Chandler’s biological father as more of a drag performer than a trans woman. In Season 5 Episode 3 (“The One With All The Thanksgivings”), the character was portrayed in a flashback by a cisgender male actor.

Then, in Season 7 Episode 22, Turner played the current day character. Now identifying as Helena Handbasket, she worked as burlesque performer in a revue called “Viva Las Gaygas” and was said to have attended Chandler’s high school swim meets dressed as different Hollywood starlets. At the urging of his fiancee, Chandler asks Handbasket to attend their wedding despite not having spoken to her in years.

Handbasket was treated as a repeated punchline, subject to misgendering and transphobia despite her being fabulous and self-assured individual.

“It was a 30-minute sitcom,” Turner said. “It became a phenomenon, but no one ever took it seriously as a social comment.”