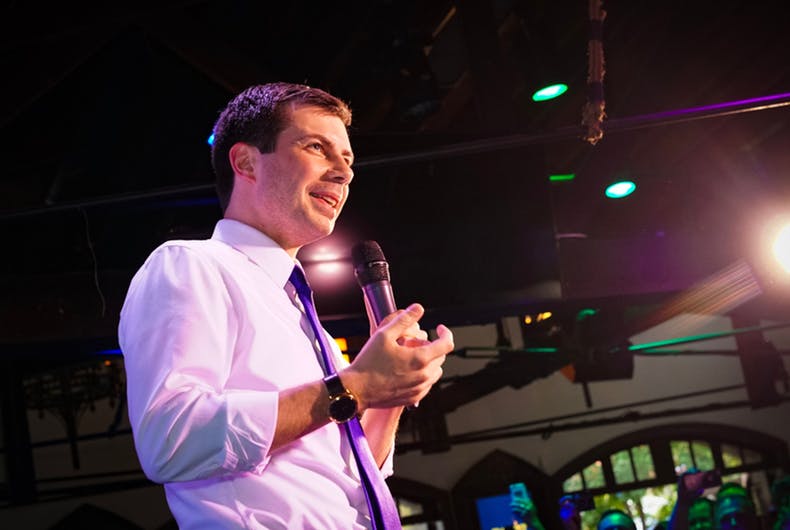 Last night the top ten Democratic contenders for the party’s 2020 presidential nomination faced off in a debate in Houston, Texas.

During the debate, the candidates were each asked to share a story about when they needed resilience. South Bend Mayor Pete Buttigieg talked about coming out as gay.

As a military officer service under Don’t Ask Don’t Tell, and as an elected official in the state of Indiana when Mike Pence was governor, at a certain point, when it came to professional setbacks, I had to wonder whether just acknowledging who I was was going to be the ultimate career-ending professional setback.

I came back from the deployment and realized you only get to live one life. I was not interested in not knowing what it was like to be in love any longer.

So I just came out.

I had no idea what kind of professional setback it would be, especially because, inconveniently, it was an election year in my socially conservative community.

What happened was that when I trusted voters to judge me based on the job that I did for them, they decided to trust me, and reelected me with 80% of the vote.

What I learned was that trust can be reciprocated and that part of how you can win – and deserve to win – is to know what’s worth more to you than winning. And I think what’s what we need in the presidency right now: we have to know what we are about.

To bring about a better future, we have to know what we’re about. This election is not about anyone running for office, it’s about making things better for the people who trust us with their lives. Together, we will win a better era for our country. #DemDebate pic.twitter.com/tii4Waj5MY

On Twitter, people said that this was a sign of how much has changed since even the last presidential election.

Pete Buttigieg made history with his coming out story on the presidential debate stage: "I was not interested in not knowing what it was like to be in love any longer." #DemocraticDebate https://t.co/6Mxb85lZu6 via @HuffPostPol

Pete Buttigieg says that coming out as gay & “acknowledging who I was” could’ve been the most career-ending professional setback.

Thank you, @PeteButtigieg for your bravery, and for showing LGBTQ youth across the country what is possible when you live authentically. #DemDebate

So many #LGBTQ #military members have had a similar coming out experience:

“I came back from the deployment and realized that you only get to live one life, and I was not interested in not knowing what it was like to be in love any longer.”—@PeteButtigieg https://t.co/f5uUh0tRmN

“I was not interested in not knowing what it was like to be in love any longer.” – @PeteButtigieg#LGBTQ #DemDebatehttps://t.co/QrImwMI90Y

I never thought I’d be so moved by a political candidate. Pete Buttigieg has already changed my life, no matter what happens next. https://t.co/YD843Xt5ER

Two ancient skeletons were found holding hands. They were both men.