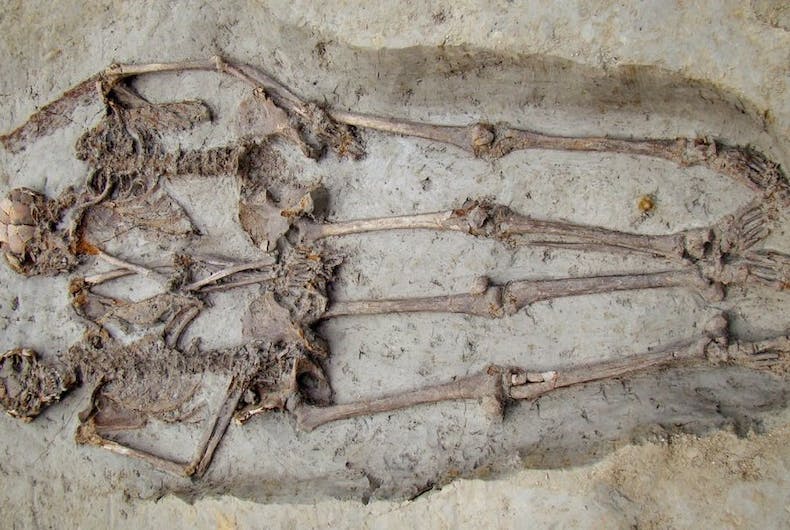 A pair of hand-holding skeletons in a burial site in Italy have been found to be male, according to researchers at the University of Bologna.

The “Lovers of Modena” – two bodies that were buried holding hands near Bologna, Italy – were first found in 2009 and are believed to have been buried between the 4th and 6th century CE.

At first, the sex of the skeletons could not be determined using genetic analysis. But researchers developed a new technique using a protein found in tooth enamel and determined that both skeletons likely belonged to men, according to an article published in Scientific Reports.

This isn’t the first ancient grave site archaeologists have found with two people buried hand-in-hand; others have been found in Greece, Turkey, Romania, and Russia. But those were all male and female couples.

And while researchers were confident enough about the couple’s relationship to name them the “Lovers of Modena” in 2009, discovering that they were both men has researchers confused.

“There are currently no other examples of this type,” Federico Lugli, the lead author of the study, told Rai News. “Many tombs have been found in the past with couples holding hands, but in all cases there was a man and a woman. What might have been the bond between the two individuals in the burial in Modena remains a mystery.”

Lugli said that it wasn’t common for men to be buried like this in this time period, but that their burial suggests a relationship of some sort.

“In late antiquity it is unlikely that homosexual love could be recognized so clearly by the people who prepared the burial,” he said, suggesting that they may have been cousins or soldiers.

He did not speak to the possibility that one of the individuals in the tomb lived their life as a woman and had “male” protein on their tooth enamel because they were transgender or intersex.

Someone wrote ‘sodomite’ on a woman’s luggage tag. Why hasn’t Delta looked into it?