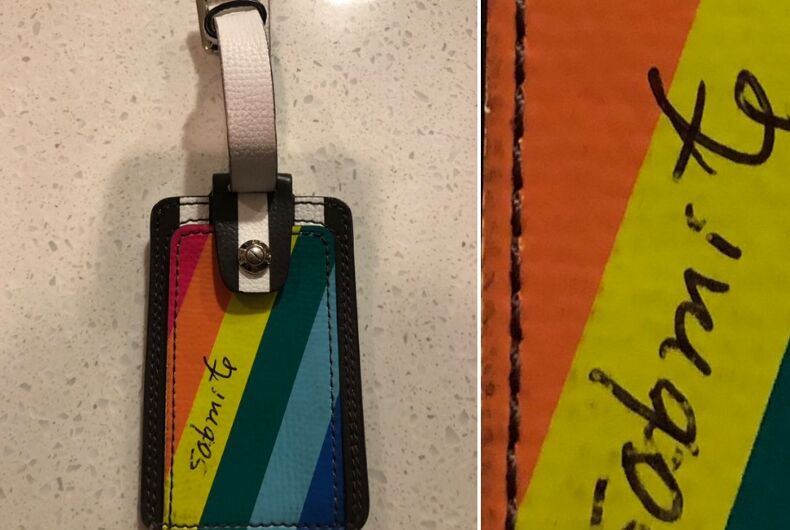 When Renee Gerrish boarded her Delta flight from Boston to Atlanta, she had no idea what would be waiting for her when she arrived.

An LGBTQ ally, Gerrish has a rainbow flag luggage tag on her suitcase. When she picked up her baggage, she found that someone had scrawled “sodomite” on it. The Henri Bendel tag had sentimental value and is irreplaceable now that the company has gone out of business.

“I’m deeply hurt and offended that someone felt the entitlement to ruin and tamper with personal property with hate speech,” Gerrish told LGBTQ Nation. “I’m also annoyed Delta has not reached out to me.”

“I wear LGBTQ+ support clothing and accessories regularly,” she added. “As a girl, I love rainbows, but as a symbol of love and support for the community that means everything to me. I don’t care if someone thinks I’m gay because of choices in rainbow accessories, good for them if the do.”

Related: Delta refused to let a deaf LGBTQ couple board their flight after they asked to sit together

“As a hetero woman, I can only know my hurt, anger, and disappointment… PALE in comparison to what the LGBTQ+ community experiences on a daily basis,” Gerrish sent to the airline’s customer support.

Delta noted their history of inclusion in a statement sent to LGBTQ Nation but couldn’t explain why no one had followed up. Instead, their response indicated incorrectly that they had.

“Delta does not condone discrimination of a person or group for any reason. As a global carrier with a diverse workforce, serving a diverse customer base, we are committed to treating all passengers equally,” the representative said. “Thank you for your concern and please know we have followed up with those directly involved.”

“Delta is a brand that advertises their celebration of diversity but there are individuals employed by them who clearly don’t feel the same. And this was a result,” Gerrish shot back. “I’m sure I’m not alone. If this person did it to me, who knows what else they feel they have a right to do.”

This isn’t the first negative incident that has happened when LGBTQ people fly with the airline. Earlier this year, Delta refused to allow a deaf queer couple to board their flight after they asked to sit together.

In 2016, the airline came under fire for editing out lesbian kisses from the movie Carol. But Delta allowed Chris Rock’s Kill the Messenger comedy special complete with antigay slurs. The airline eventually yanked the special from their inflight offerings.

Delta did not respond to a follow up request for comment after it was pointed out that the company had not talked with Gerrish about the incident.

Someone at Delta Air Lines baggage handling took it upon themselves to write “sodomite” on my 🌈 luggage tag. Bigotry, hate speech and destruction of personal property while in @Delta airline’s care. I want this shared and on behalf of the LGBTQ+ community- I will not go quietly. pic.twitter.com/BzbG4n0jas

Two ancient skeletons were found holding hands. They were both men.

A trans Lyft driver was viciously attacked by a customer. Now she’s too afraid to work.