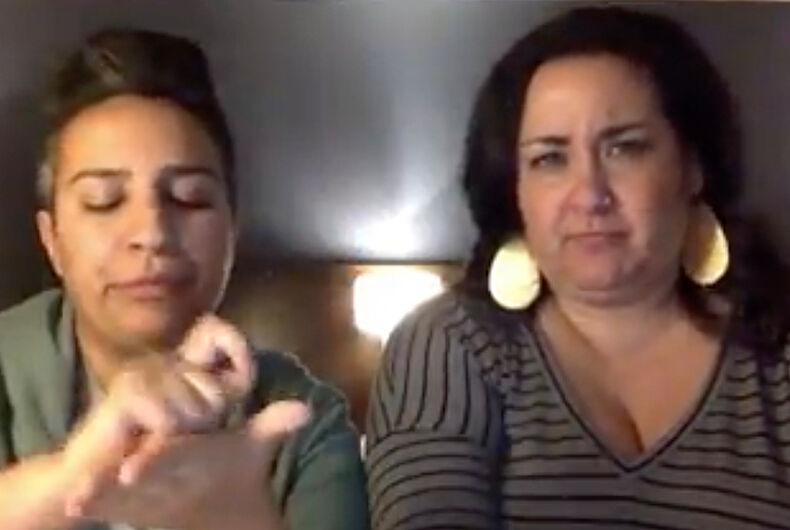 Socorro Garcia and Melissa Elmira Yingst were leaving the National LGBTQ Task Force’s Creating Change Conference in Detroit via Delta Air Lines when they say they were discriminated against because they’re deaf.

The couple had purchased their tickets separately, but wanted to see if they could sit together on the flight to Los Angeles, and had been told previously that they should be able.

Yet when they attempted discuss the issue with the gate agent, identified only as Felicia, things went in a very different direction.

The "infamous" Deaf airport discrimination experience happened to us tonight with Delta Air Lines, Delta airlines at DTW. No one in our community is immune to this kind of oppression. Video Description – Melissa and Socorro are both wearing green shirts and are seated in front of a blue wall with lights. (Transcript in comments)

“We learned that our seats aren’t together when we first checked in, but the woman said that she made a note and we would be given seats together when we went to the departure gate, so we went on to the gate,” said Socorro Garcia in a video posted to Facebook.

“At the gate, we communicated our request through iPhone and she kept talking to us without writing anything down. I received an assigned seat but still not able to sit together.

Related: Did Southwest Airlines kick out a couple because they’re gay?

“So, Melissa showed her iPhone, started questioning why since we were told we would sit together at the front,” Garcia continued.

“The gate agent rolled her eyes at us. Melissa asked for her to write. After few moments, she finally wrote on a piece of paper and said, the flight is full and can’t book us together. I wanted to continue to communicate and decided to try and write on that same paper but instead of giving us the paper we asked for, she crumbled it in front of us and threw it in the trash.

This is when things escalated.

“I walked to the trash to pick it up but she pushed me away,” said Garcia. “Melissa was stunned and took out her iPhone to take a video of her and then Felicia turned on her iPhone to film us.”

In spite of numerous requests for something to write on in order to discuss the issue further with Felicia, the gate agent shook her head no. Eventually, police were called, with Felicia claiming that Garcia had “assaulted” her by going behind the counter to retrieve the paper from the trash.

“The police arrived and said that I assaulted her and was asked to leave,” said Garcia. “After numerous of times to communicate with the police back and forth regarding her refusal of communication, they said there is nothing that they can do but for us to book another flight back to LA. So, we left and here we are at a hotel near the airport.”

During this, Yingst took to her Twitter account, explaining that the gate agent would not communicate with them, and reiterating that she threw away the paper.

Wow. Am at @Delta airlines in Detroit. Front desk attendant Felixia refuses to communicate with us in writing and even threw away the paper she wrote on with us.

Delta Air Lines told the Detroit Free Press that the gate agent was intending to work with flight attendants to get the couple seated together, but refused to let them board because Garcia went behind the counter and pushed the agent. They also said that they have refunded both Garcia and Yingst’s tickets, and are looking into the situation further.

“Delta is in contact with two customers who reported having difficulty communicating with a gate agent prior to their flight,” said Delta Air Lines spokesman Michael Thomas said via a press statement. “We are reviewing the situation with our Detroit team and will work with these customers to better understand what transpired. As always, we take situations like these seriously and we are using this as an opportunity to learn and improve.”

Delta Air Lines claims on their website to offer assistance on their flights, including “assistance communicating, checking in, boarding, deplaning or while connecting to another flight.”

National LGBTQ Task Force has called on Delta Air Lines to apologize to the couple, reimburse them for the additional costs they incurred, and enact new guidelines for their staff to assist deaf, blind, and disabled passengers.

“It deeply pains us that Socorro Garcia and Melissa Elmira Yingst ended the conference with this unacceptable incident,” said the organization via a press statement. “The National LGBTQ Task Force will always work to do better. We encourage Delta to work harder on its own journey towards disability justice.”

Garcia and Yingst returned to Los Angeles via a different airline.