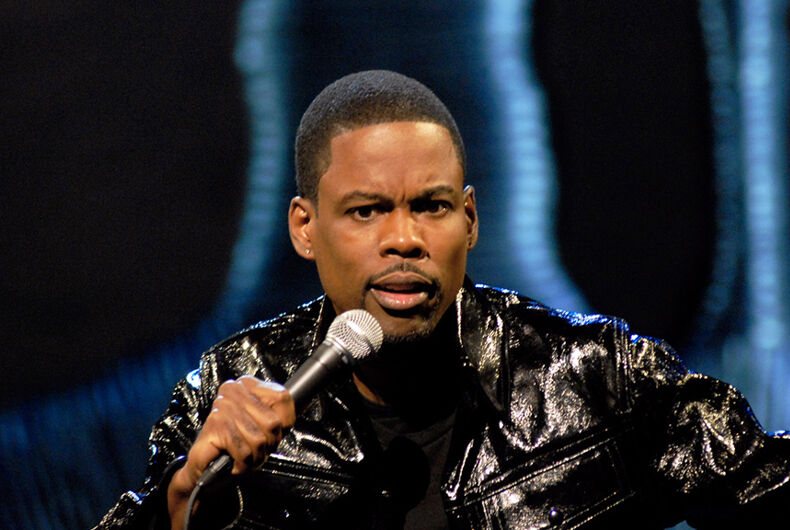 Delta Airlines is pulling a Chris Rock special from their in-flight entertainment options after a gay customer pointed out that it contains anti-gay slurs. The comedian insists using the word “faggot” is okay in some circumstances in a segment of the 2008 “Kill The Messenger” stand up show.

“We apologize to any customers who were offended by the content or our airing of the segment, and we are working as quickly as possible to remove it from our aircraft,” the company said in a statement to Gay Travel. “Our commitment to inclusion and respect of all customers is rooted in Delta’s values and culture, and we proudly embrace diverse people, thinking and styles.”

“The Chris Rock ‘Kill the Messenger’ segment should not have been uploaded on flights based on our criteria for excluding onboard programming that includes content featuring explicit language, slurs, extreme violence, and explicit scenes.”

Jeremy Foreshew, a Grindr employee, was returning from a trip to New York to meet with activists and human rights groups when he noticed the program was available on his flight. Since he had previously worked with a company that sold entertainment packages to airlines, he said he was curious to see how Delta would handle the notoriously graphic comedian’s rant.

Noticing that the content wasn’t censored and was available to anyone for free, Foreshew notified a flight attendant who called ahead to Delta and LAX officials who met him at the gate to take his complaint.

“Having come from being with all these activists, knowing the current state of violence against the LGBT community, and knowing the current political climate… I just came to a place where I couldn’t believe this was something happening in 2016,” Foreshew said. “When you think of the number of people who fly Delta every day and have access to that language… it just shocked me.”

Delta came under fire recently for showing a censored version of the movie Carol that cut out a same-sex kiss between two main characters. The airline brushed off complaints, saying the edited version they showed also cut out all sex scenes and kissing.