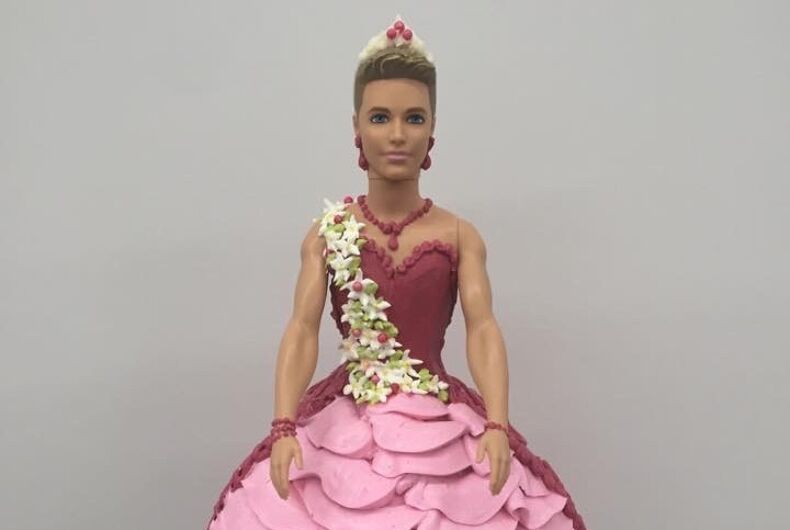 After a Sacramento baker posted a photo of her latest creation on Facebook, conservative Christians started accusing the baker of promoting transgender rights and leaving negative remarks. What they didn’t know was that the cake had nothing to do with transgender people – but the blatant bigotry on display did create another ally for the trans community.

“A customer requested a Ken doll cake and we were happy to make it; she loved the cake when she picked it up. We were especially proud of its buttercream detail so we decided to post a photo of it on our Facebook page, as we do with many of the cakes we design and adore,” bakery owners Walter and Marlene Goetzeler said in a statement on their website.

Ken, Barbie’s on-again-off-again boyfriend for decades, is shown standing up wearing a giant pink frosting dress, a sash, and custom made jewelry. The cake was made for a group that gets together once a month to play games to celebrate one of the members’ birthday.

“We got some lovely responses along with some negative feedback. We deleted the ones we felt weren’t helpful to anyone. A few days later, we noticed a large number of unlikes on our page and realized they were a result of our Ken cake post.”

“Naively, I guess I just thought this is a really cool cake, and look at how great they did with the buttercream,” said Marlene Goetzeler told the local FOX station. “What’s wrong with a Ken cake?”

“We reposted the picture asking for support from our Facebook friends. Luckily, we have received that support and so much more from our fans, devoted customers and staff,” the owners said.

“In the beginning, I thought ‘What’s the big deal?’ but now I realize how important it is to take a stand if you believe in something,” said Goetzeler.

The original photo now has over 1000 likes, while the reposting has over 2000.

No one, however, has said whether or not the cake was delicious. And isn’t that the most important part?

Most populous nation on earth adopts ‘all gender’ public toilets