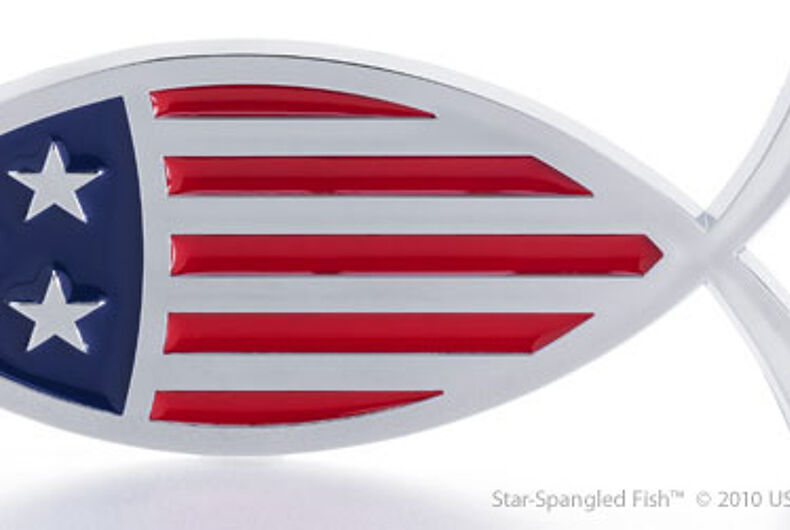 Matt Barber — the extremist antigay Christian who once denounced icon Harvey Milk as “evil” — runs a website called BarbWire which emailed his followers Thursday with a diatribe against the LGBTQ community and the progressive political movement that supports us, that doubled as a sales pitch.

As Joe.My.God posted, the general idea is we are outnumbered, and Jared Vallorani, the CEO of an outfit called Liberty Alliance, has come up with a plan to strike fear into our hearts and stop us in our tracks. The plan involves a magnetic fish that he wants his troops to purchase and place on their cars.

“Dear fellow Christian and Patriot, Our nation is reeling. I turn on the news and see Bruce Jenner being celebrated for wearing a dress. Women on Instagram exploiting their bodies for fame. The music industry is selling sex, drug use and explicit language to our children. I see riots in our streets, as men throw rocks at police and vandalize public property. Protesters stomping on and burning Old Glory. I see “race” issues getting worse instead of better. Our kids on college campuses being brainwashed by liberal ideology and thinking socialism would make America better. We have watched millions of babies get aborted each year, gay marriage legalized across this nation, and now bathrooms are no longer separated by sex? Where does it end?

“Maybe you feel like it’s hopeless to save our nation. In 70 AD, Rome came and sacked Jerusalem. They burned everything to the ground, just as it was foretold by the prophets. But yet a remnant remained. Today in America, there are still millions and millions of Bible-believing Christians throughout our nation. The homosexual population? Less than 3%. Transgenders? Less than .3%! Why are we scared? We are the MANY, they are the FEW. We need to take back our streets, take back our cities and take back our nation for the Glory of God! Men and women, I call on you to get on your knees before a Holy and Just God to cry out for your country. God has given us the King that we begged for. We have reaped what we have sowed.

“But it’s not too late. It may feel like it is, but I assure you, Christian citizen, it is NOT! We need to visibly show the nation that we are here and we are not going away quietly. You have seen the Jesus fish on cars for many years now. But we are more than Christians. We are Christian Patriots! That’s why we need your help. We want to see 1 MILLION cars on our streets and highways with this emblem. We are not hiding. We are right in front of you and we will not lay down and allow any more of this foolishness to destroy our country that our fathers, grandfathers, and great-grandfathers fought and died for. I want every Christian Patriot in America to get the Star-Spangled Fish Emblem for their vehicle. Can you imagine driving through town and seeing 5 out of every 10 cars with the emblem on it?

“I assure you, they will take notice! Just like in any game, when the defense makes a big play, it strikes fear in the heart of their opponent. We have been on defense for far too long. It’s time to go big and strike down this progressive movement in America. We will infiltrate every area of culture and politics. This will be our calling card. Change starts small, but like a snowball rolling down hill, we will become a force that cannot be stopped. Join me, my brothers and sisters! If we do not take action today, there may not be another chance for us. Sincerely, Jared Vallorani, CEO, Liberty Alliance.”

An alternative is available, by the way, from the United Church of Christ: