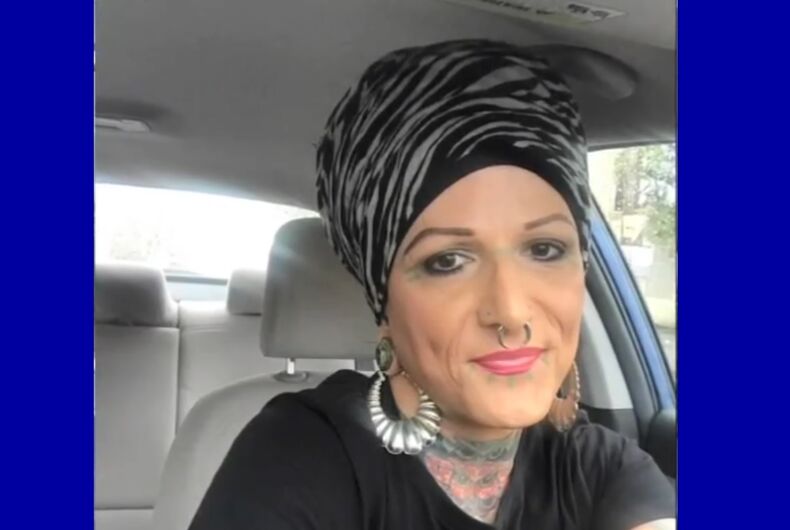 A Lyft driver in Oregon said she’s too afraid to do her job after a transphobic customer attacker her.

Marla Standing-Owl became a Lyft driver last year after she says she lost her previous job to transphobic discrimination.

This past Friday night she picked up a man who she believed was intoxicated at a hotel in downtown Portland.

“His speech was highly slurred,” she said. “He could barely get in the car. He didn’t know where he was going.”

After about a mile, she said that he asked her to pull over. That’s when he attacked her.

“Punching me in the head and the neck and when I reached behind the seat to stop him from attacking me further, he twisted my arm back which popped it,” she told Fox 12. “As he was beating me, he was calling me an ‘effing tranny.'”

“He gets out, he comes around the back, and starts coming toward me so I pepper-sprayed him.”

She said that he yelled a bit more and then ran away.

She called the police and they are currently looking for the man.

Standing-Owl said that she’s now too scared to pick up anyone else.

Trans people are “just trying to go to work like everyone else,” she said. “We’re just trying to live our days and none of us chose this and to be physically and verbally attacked and made fun of every single day makes it very hard for most of us to function.”

Lyft said in a statement that the customer’s account has been removed, although they can’t know for sure if the account holder was the man in the car or if someone else called the ride for him.

“Safety is fundamental to Lyft. What the driver described is frightening, and the rider’s access to Lyft has been permanently removed. We responded immediately and have been in close contact with the driver since the incident to offer our support. We have reached out to the authorities and will continue to help in anyway we can.”

Portland police said the attack is being investigated as a possible bias crime. No arrests have been made yet.

Someone wrote ‘sodomite’ on a woman’s luggage tag. Why hasn’t Delta looked into it?