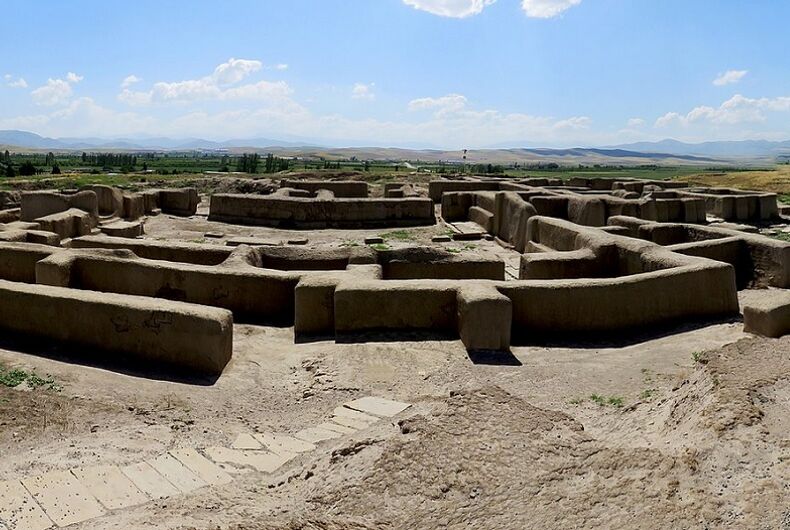 A recent study of 51 tombs at Hasanlu, an ancient burial complex in what is now northwestern Iran, shows that burial rites likely included a third gender beyond male and female.

Megan Cifarelli, an art historian out of Manhattanville College, conducted a study on 51 tombs at Hasanlu, determining what objects were with remains in each tomb, and try to draw an inference among the objects. What she found reimagines the role of gender in the area.

Cifarelli’s algorithm, however, also discovered that roughly 20% of the tombs studied had items associated with both genders.

In one case, a bladed weapon and a metal drinking cup – expected in sites associated with male skeletons – were entombed with a garment pin and needle, which indicated feminine dress. The sex of the remains in that tomb remain undetermined, as parts of the skeletal remains used to determine sex were unavailable or too damaged to examine.

In a second example, an arrowhead and a garment pin were discovered, also crossing gender boundaries as known from the culture buried at Hasanlu.

While it remains unclear, Cifarelli suspects that this points to the existence of a recognized third gender at the site, rather than items left by grieving relatives of the deceased. The burials on the site are highly ritualized and it is unlikely that a relative of the deceased would have opted to leave an item of theirs as a random gesture.

“The social categories that appear in burials are more formal, less individualized and generally conservative,” said Cifarelli to Haaretz. “It’s a moment for the family to assert this person’s social identity.”

Cifarelli’s work also does not tell if those with cross-gender objects did so by as part of their preferred gender role, or if it was a category bestowed on those with physical presentation outside of male or female, such as intersex people.

There are other pieces of evidence that lead one to conclude the culture at Hasanlu incorporated a third gender: a golden bowl that was previously discovered at the site includes a figure wearing female garb and sitting on the floor – a position commonly shown for female figures in the culture’s iconography. That figure, nevertheless, also has a beard.

The Hasanlu site has long been famous for a pair of embracing skeletal remains, known as “the lovers.” these remains were reveals through skeletal and DNA evidence to both be male.

These two WNBA players got married in a quiet, beautiful ceremony